This simple plain paratha recipe shows you how to make Indian Paratha flatbread on the stovetop. This easy paratha dough recipe creates a paratha with just the basic ingredients of all-purpose flour (plain flour), salt, an egg, water and ghee. 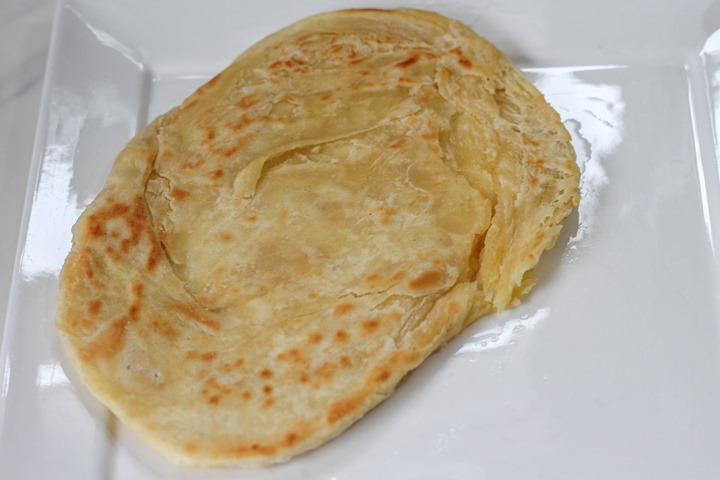 Parathas are a very common type of unleavened flatbread used in Indian cuisine. The paratha has many different names such as: prontha, parontay, porota, palate, forota, parantha, parauntha to name but a few, depending on where you are.

There are many different varieties and they are normally based on whole wheat flour. There are plain versions and stuffed paratha versions and they can be eaten as a snack or accompaniment to a meal. Or even for breakfast. 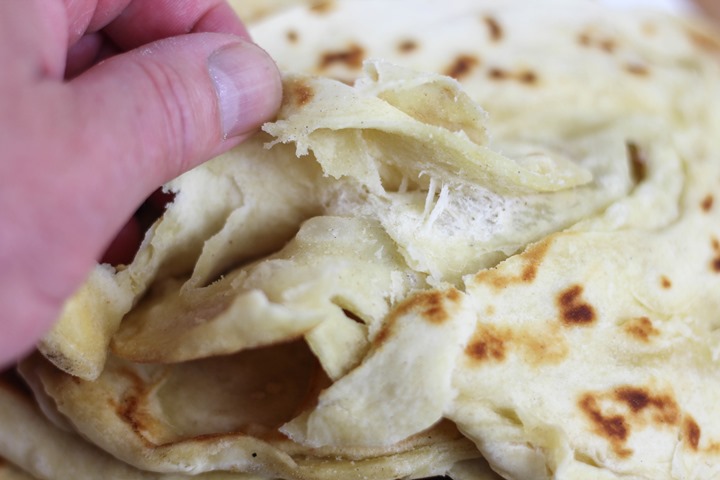 Parathas are great for picking up food or for dipping in raita or pickle for example. This is one of my favourite Indian bread recipes.

Parathas may be served up in circular, triangular or even square format.

Parathas are different to naan bread in several ways. Firstly parathas are traditionally cooked on a tawa or tava (a flat frying pan) on the hob, whereas a naan is cooked in a tandoori oven. 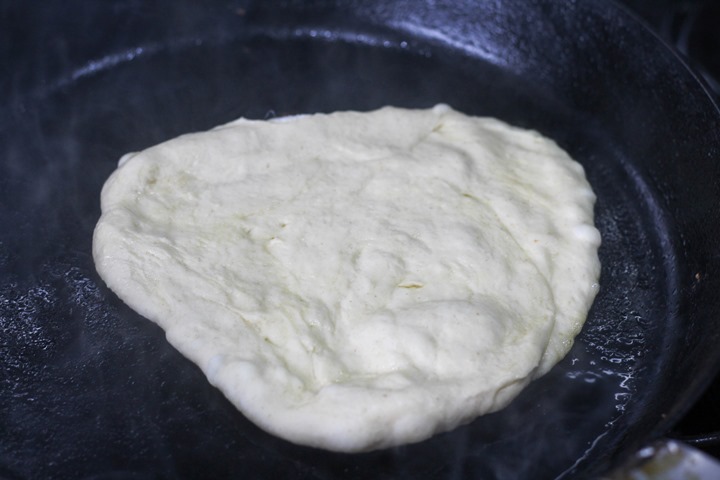 Frying paratha in a skillet

Also, parathas are often folded several times a bit like puff pastry to give a flaky bread. The folding is done so as to produce rings in the paratha. This makes it easy to pull apart so you can use it to pick up food or mop up sauce.

In comparison, you may find the naan a bit thicker as it is often made with yoghurt and yeast in the dough. They will both also behave differently if you decide to stuff them, because of the method of cooking. 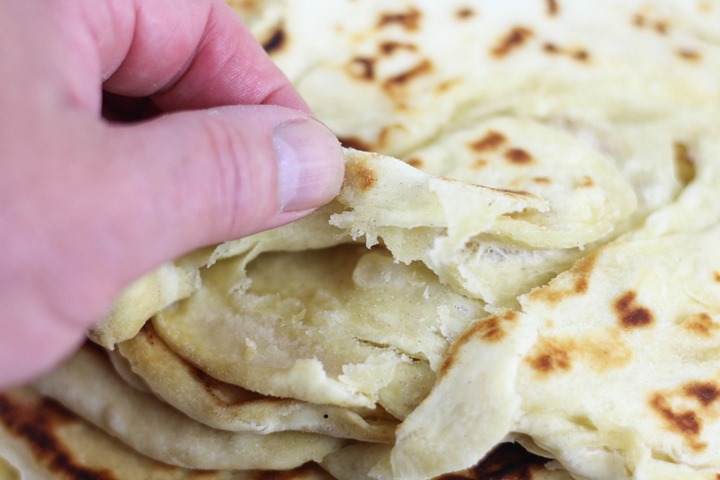 The cooking of a paratha does use a fair amount of ghee, I must say, so perhaps it is not as healthy as some other Indian flatbread like roti or chapatis.

But both flatbreads are delicious in their own right and really both should be tried. Serve them both up with your main course and see which goes first! 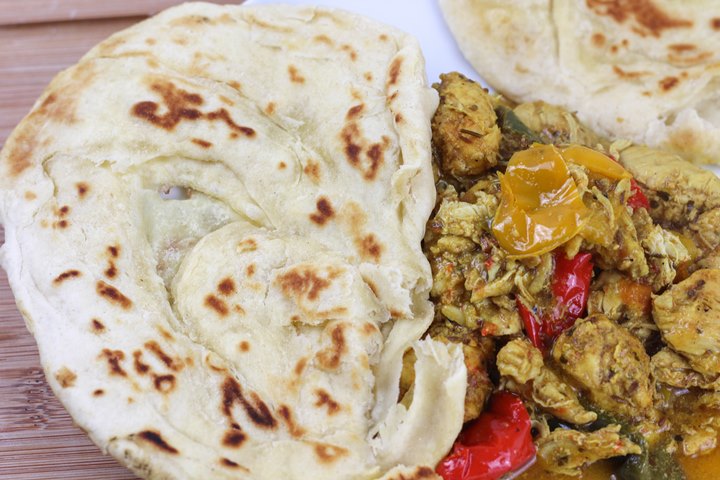 How to fold a paratha

There are several ways to fold a paratha to create a flatbread with lots of layers. I have tried a couple of them.

Luckily your folding technique does not have to be perfect to produce a tasty paratha (as proven by my pictures below!)

This is method 1 as described in the recipe card below: 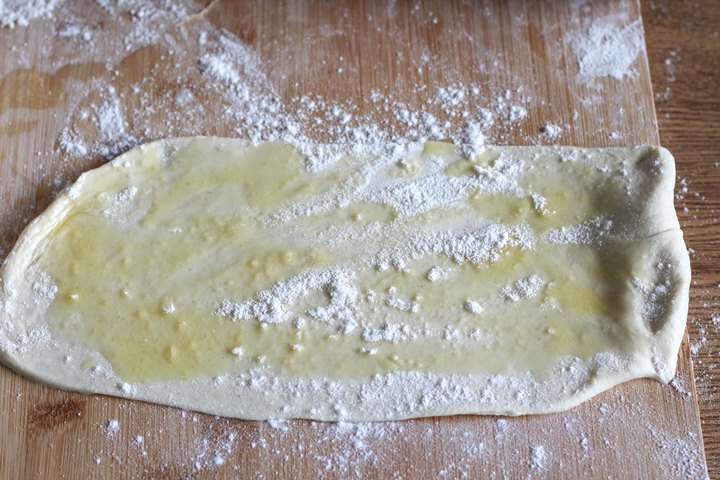 Roll into a rectangle, brush with ghee and sprinkle with flour 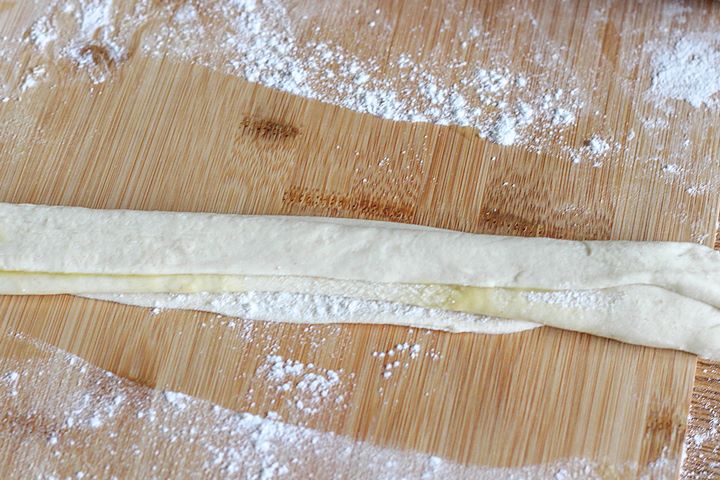 Roll into a circle before rolling flat with a rolling pin 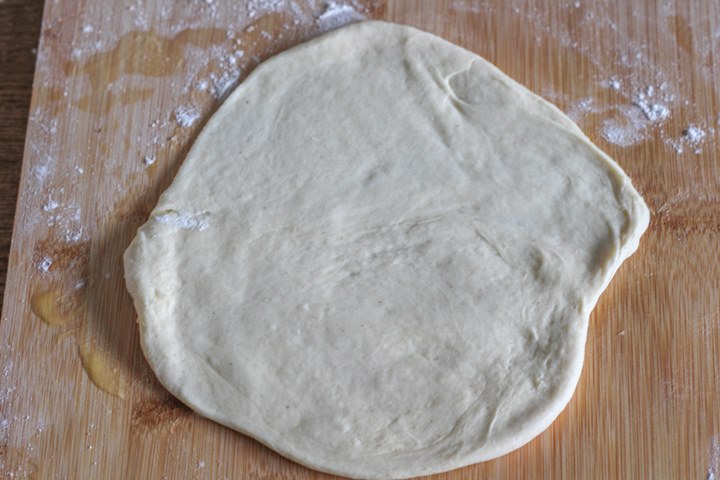 Start with a circle…..well sort of 😂 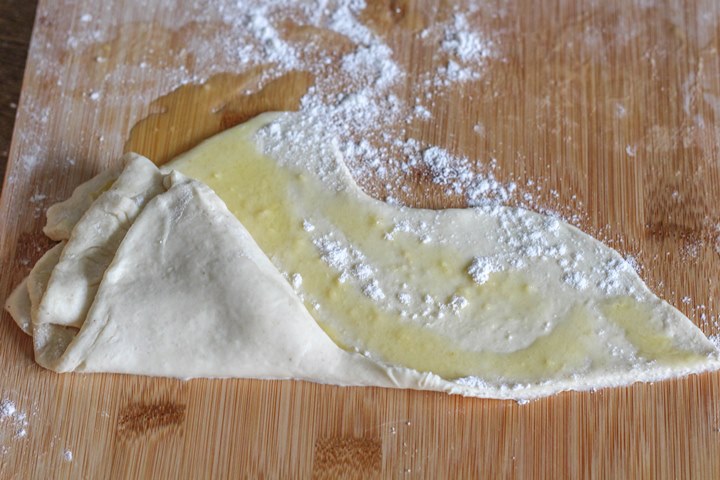 Fold into a cone shape

My apologies for the poor photos but my fingers were covered in Ghee and my folding technique still needs some working on, even though this did seem to work!

I hope you get the idea.

We have found this paratha recipe to be a great accompaniment to my authentic Indian chicken curry and will be making it more often in the future as it is so easy to make. It is also quicker than my naan recipe, which I always made in the past to accompany this curry.

I hope you have fun trying this. If you do then please let me know how you get on in the comments section below!

How to make Paratha Bread

There are various ways to create the spiral form in the paratha. Here are two:

Serve up immediately when hot.

Or alternatively try these bread recipes instead:

This would also taste good with a paratha:

Or to complement your meal, maybe an Indian appetizer?

Egg? Why egg? Never used egg in paratha before.

Try it. It works.