Belgian Frites – the best in the world

The best ‘French Fries’ in the world actually don’t come from France, they come from Belgium. Belgian French Fries. There they are known as ‘Belgian Frites’. This post will give you some background and show you how to make your own delicious Belgian Frites at home.

What are Belgian Fries?

Belgian fries are just like any other type of deep-fried potato, but one of the secrets is that they are fried twice. This, and what they are fried in, is what makes all the difference to making good fries. You can read more on this later in this post.

Deep-fried potatoes are called different names in different countries, but all stem back to the original Belgian Frites.

They are called ‘French fries‘ or ‘fries‘ in the USA, ‘chips‘ in the UK, ‘frites‘ in Belgium, ‘patat‘ in the Netherlands, and ‘pommes frites‘ in France.

According to Wikipedia, there is a dispute between the French and Belgians as to who invented French fries originally. But it seems to be likely that the origins were actually in what is now Belgium, in the Meuse valley in the 17th century, near Dinant. This does not surprise me as I have been to that area many times and the food in that part of the world is wonderful.

It is certainly the case that frites are now a very common and popular street food all over Belgium and the Netherlands. The Belgian frites also differ from the somewhat thinner frites one might expect with a steak-frites in France or at a McDonald’s.

Why are they called French Fries? Well, the story goes that American soldiers called them French fries when they returned from WWI, as they were ‘fried potatoes’ and came from France (even though they may have been stationed in the French-speaking (southern) part of Belgium).

In the UK we call french fries ‘chips’. Whatever the origin of the different names, I think the fries you get in Belgium are superior to all. 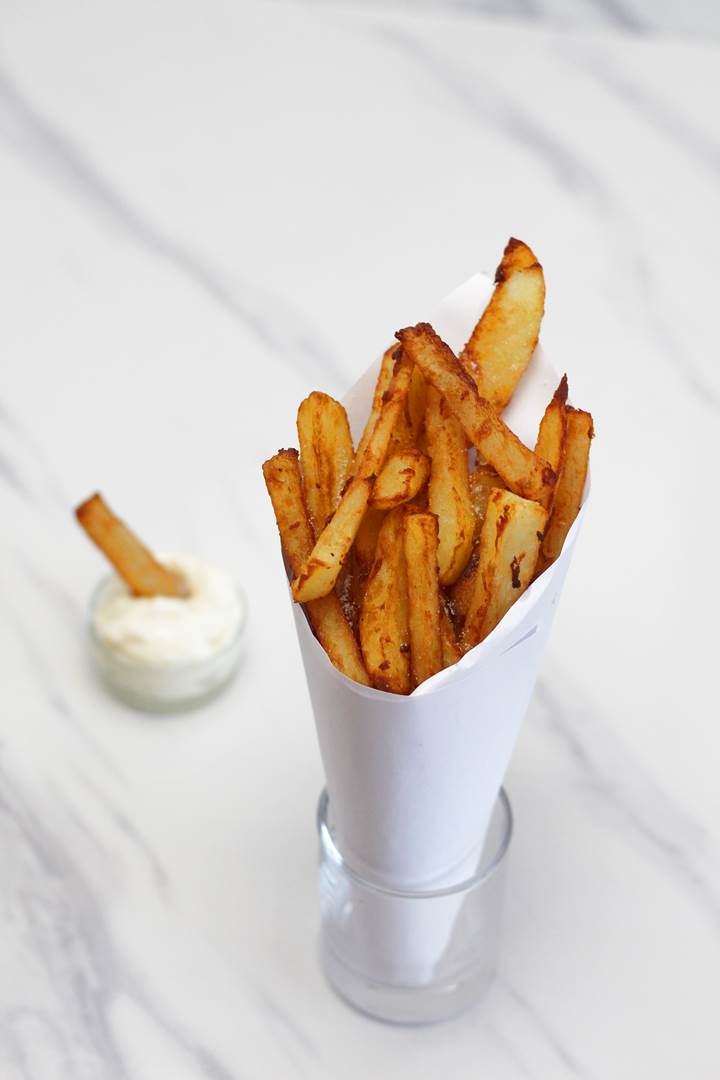 I lived in Holland for 30 years. Dutch fries are in some ways similar to Belgian fries. But they tend to have more variations in how they are eaten, with funny names.

We used to go to Bram Ladage, a famous Dutch chippy in several places around Rotterdam, and order some Dutch fries and mayo, or a ‘patatje oorlog’. ‘Oorlog’ in Dutch means ‘war’ and ‘patat’ means fry. War chips!!

The patatje oorlog recipe is an interesting combination of chips with a messy sauce. The oorlog sauce is a combination of mayonnaise (or to be correct Dutch ‘frietsaus’), peanut satay sauce (delicious!) and optionally small chopped raw onions. Sometimes tomato ketchup may be included as well.

It is often served in a plastic or cardboard plate, or in a coned piece of paper, and eaten with a plastic fork or with your fingers. You can buy this at most town markets on a Saturday and any fast food counter. It is very good in fact.

Dutch chips are a great and tasty snack but in my opinion, they still do not compete with the Belgium chips or Belgium fries you can get in any city in Belgium. Served with Belgian mayo they are just fantastic.

I used to drive miles out of my way, on the way to the ferry to the UK in Dunkirk, for one reason –  to eat a steak and Belgian chips at Restaurant Terminus on the French/ Belgian border. This place serves the best frites in Belgium that I have ever tasted (and also the best steak)!

I do not know how they cook their frites there, but they are exceptional (I used to go there at least twice a year for 25 + years). We would literally drive about 45 minutes out of our way to go there.

Sadly I have not been back for a few years now since we have moved away from the continent. But if you are ever in the area there, visiting WWI graves in Ypres, for example, it is worth driving out of your way to visit.

Here we are going to show you how to make home fries, just like the ones in Belgium. Of course, the Belgians have a few secrets to their frites.

The first trick is that they deep fry their fries twice – which is why they are so good. Apparently, McDonald’s also do this, but that is where any similarity ends. The first fry should be at 125C and the second fry at 175C. It is important to have the oil at the correct temperature and to fry for the correct amount of time to get nice crispy chips at the end, with a soft inside.

Another trick is of course the type of potato used. In Belgium, the bintje is a commonly used type of potato for frites. Even the size of the cut potato is also important – in Belgium this varies between the North and the South. In Flanders (North) the size may be around 10/11mm, whereas in the Southern part of Belgium they may have 12/13mm sized fries. 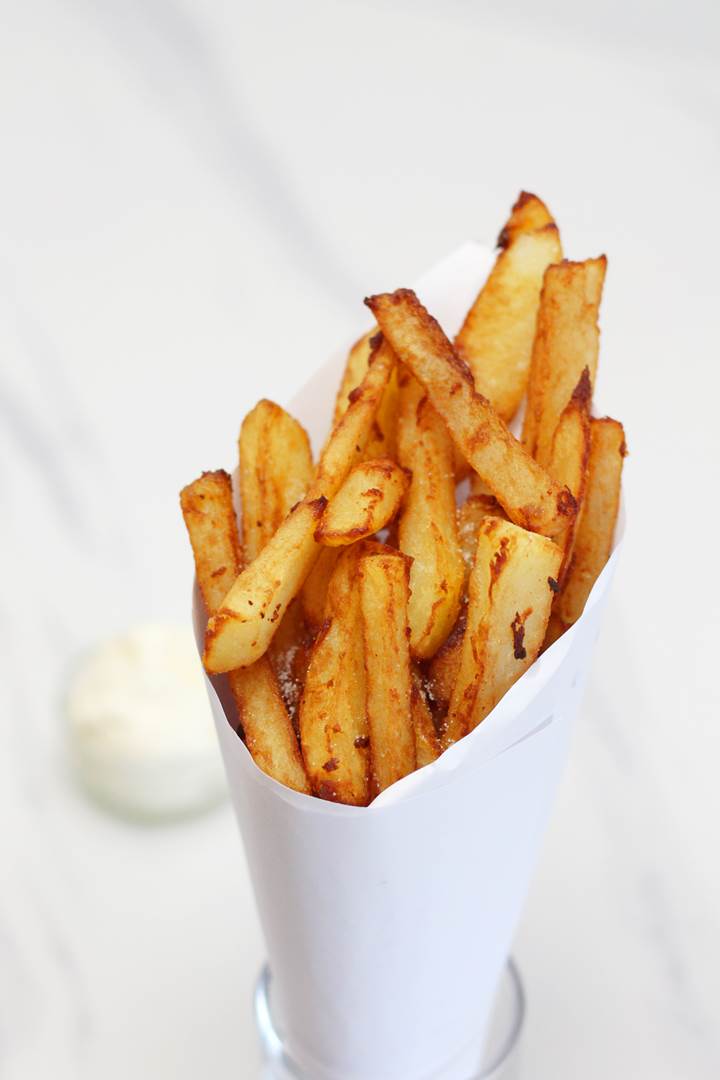 And the most important trick, perhaps, is one that we also use in the North of England in the rather higher quality fish and chip shops. That is to use beef fat, or beef dripping to cook the chips.

Beef dripping chips. Wonderful. The animal fat adds something special to the taste of the fries, although it is probably not as healthy as using vegetable oil.

I used a mixture of vegetable oil and beef dripping in the fries I made in these pictures.

If you are feeling particularly ambitious you could try making some real homemade Belgian Mayo to go with them…..

Chips off the old blog?

The reason I have included Belgian French Fries on this blog is that everyone should have the chance to try them! This was one of the first times I tried to make homemade french fries.

I was never a great lover of ‘chips’, as I do not like them if they are greasy and undercooked. The taste of the potato is also important to me.

This recipe brings out the best of the potato taste and not only that, it gives a great crispy outer layer. I am a complete convert now. 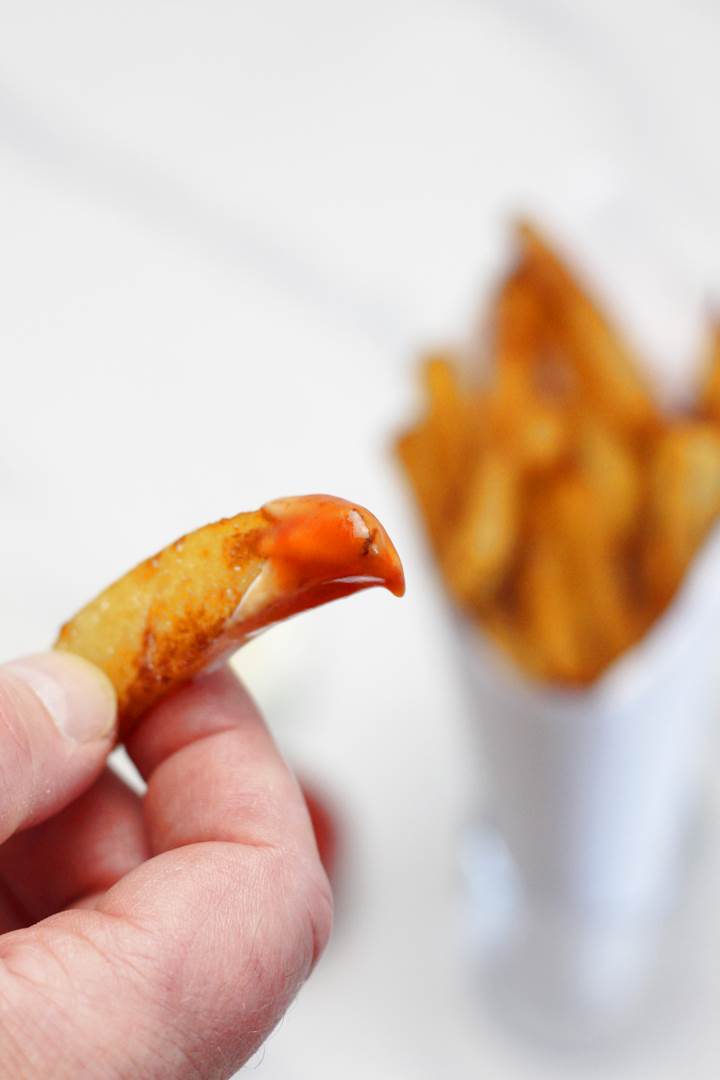 I hope you get great results as I did. Please be careful when making this recipe as a boiling pan of oil is what they used to use to stop people raiding castles in the old days – i.e. it is a potential weapon and very dangerous cooking utensil.

Be aware at all times.

I hope you enjoy trying to make these. Let me know how you get on in the comment section below!

How to make great Belgian Frites

Belgian frites are best served up salted with a healthy dollop of mayonnaise. They have special frites mayonnaise for this in Belgium and Holland (fritesaus)! Often the frites will be served in a rolled cone of paper, with the mayonnaise.

In Holland this is called ‘patat met’ which means ‘fries with mayo’. The Dutch also have ‘patatje oorlog’ , which literally means ‘war fries’ and includes peanut satay sauce, and onions as well as the mayo. Then you might get a little plastic fork to help you eat it. I am not sure of this is also available in Belgium, but it is quite good.

The British eat their chips with salt and soaked in vinegar. This is also a very acquired taste and you probably have to grow up with this to appreciate it!

Whatever your way of eating these chips, I have now been converted and we will be reinvesting in a fryer at some point in the near future as the chip pan is getting in the way!

I hope you enjoy the Belgian fries!

Please let me know what you think in the comments section below.

Why not try these with some traditional beer-battered fish?
READ
Beer Battered Fish and Chips

or some steak pie?

or just a steak frites with a tasty sauce?

or perhaps another way of cooking the potatoes if you do not want to deep fry them:

Everywhere I travel I ask what is your "country" must try food. In Belgium I was introduced to frities. I was told however they are twice cooked in beef lard rather than vegetable or seeds oils. My first attempt tonight!

Belgian Frites are the business! Hope they worked out for you

This was on point my family all agree! Thanks for sharing.