This blog post gives you an easy traditional English scones recipe at the bottom of the page for plain or fruit scones. It also tells you a bit more about scones and their tradition. 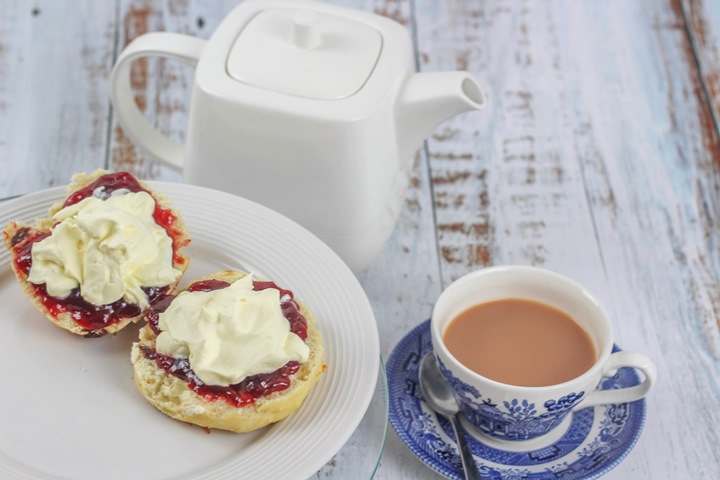 Cream tea is the name given to a light meal enjoyed all over the UK and refers to a meal consisting of a pot of tea with some scones, jam and cream. ‘Clotted’ cream tea means that the meal includes clotted cream, as opposed to whipped cream, which can also be used in a cream tea.

Normally the scones are served whole and are broken at the table by hand. The jam and cream are served separately in their own pots or containers.

Cream tea may make up part of afternoon tea, or may be served on its own at any time of the day.

Clotted cream teas are normally served in Cornwall or Devon, in the South West part of the UK. 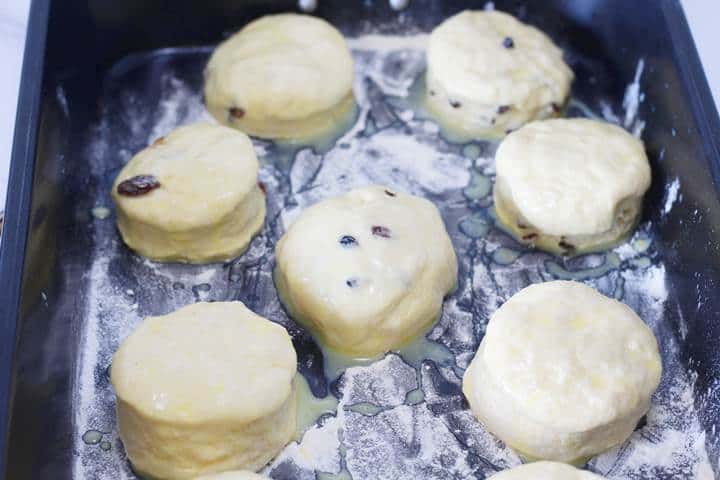 Plain and Fruit Scones ready for the oven

I have been going to Cornwall for most of my life on holiday and there they have an extra special type of cream called English ‘clotted cream’.

‘Clotted’ cream may sound disgusting to some of you ( 😃 ), but nothing could be further from the truth.

Real Cornish clotted cream is just divine, and you really cannot beat some good old British scones with clotted cream. They are made for each other. 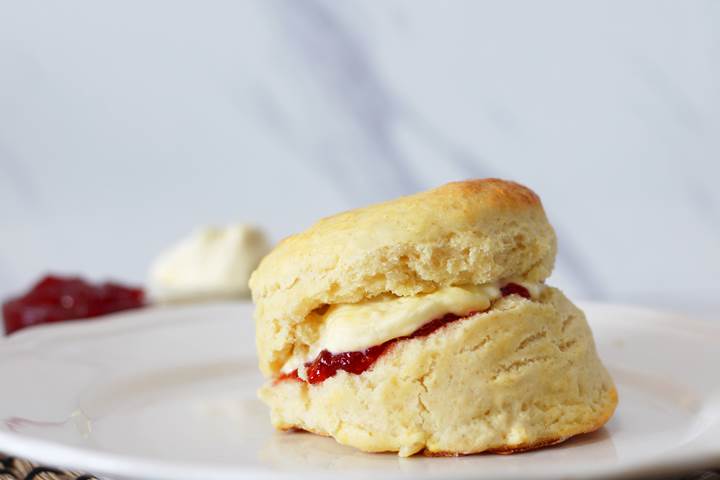 Clotted cream is found mainly in Devon and Cornwall in the ‘West Country’, as it is called.

Rodda’s in Cornwall is the largest commercial producer of this product and really if you get the chance to try it, then please do.

It is the real thing. You will love it! 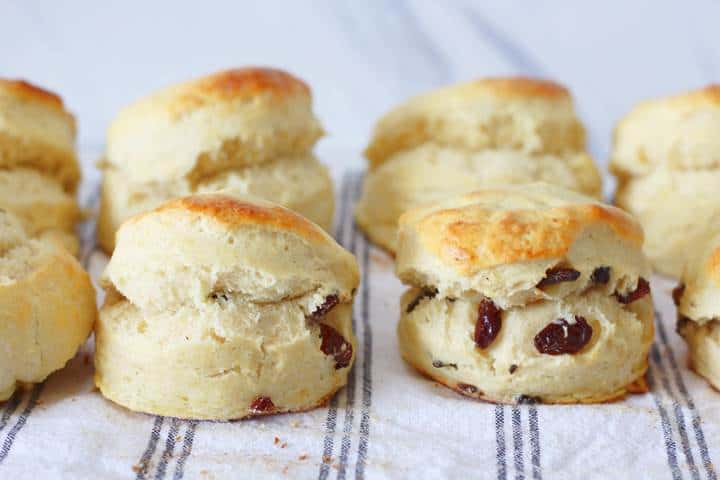 How to make clotted cream?

Proper clotted cream is delicious and the perfect ingredient for a proper English cream tea. 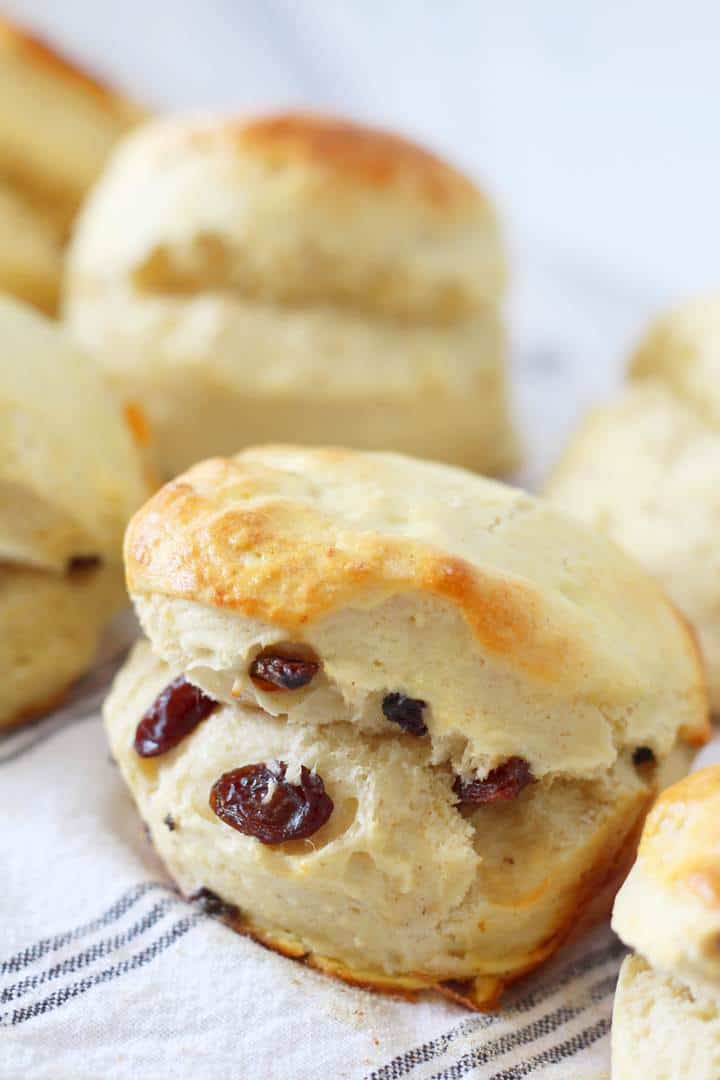 Here in Ireland where we live, we do not have easy access to clotted cream so (against the advice of Rodda’s of course!) we have used whipped cream in our photographs.

A useful tip – if you just have a single or double cream available and need to turn it into a thick spreadable cream, try using your Nutribullet. It will whip it up in no time!

[Whipped cream is in fact what you will find in most cream teas across the UK.]

In Ireland, scones are also part of the staple diet and are often found on the menu in cafes and restaurants. Over here they tend to be rather more solid than this recipe though, and are normally served with just butter and jam.

How to pronounce scone

There are a number of things about scones that cause utter disruption across the UK. One of these is the pronunciation of the word ‘scone‘.

Does it rhyme with the word ‘gone’ or ‘bone’? If you google this subject you will indeed find that scone pronunciation remains a very contentious issue. The general feeling is that both pronunciations are correct. But some argue that whichever scones pronunciation you use is geography-related, depending on where you are in the UK. Others think that it is class-related.

I myself believe that it is probably a combination of both. I was born in the South and studied in the North but tend to use the ‘gone’ version.

Follow this link ‘the correct way to pronounce scone is scone‘ for an amusing take on this subject.

Another disagreement, as mentioned in the Rodda page, is whether you put the jam or cream on first. In Devon they put the cream on first, whereas in Cornwall they do the opposite. We think the Cornish jam first option is more logical.

And we know that the Queen follows the Cornish example, so that should settle the matter 😃! 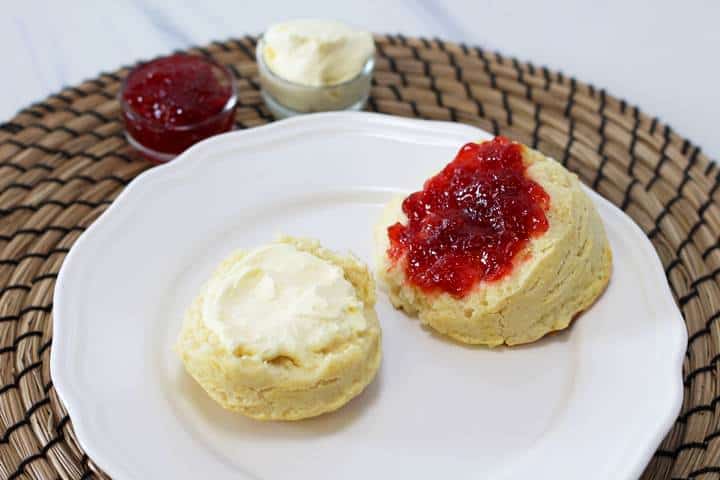 Jam on the bottom, cream on top? It depends on which part of the West Country you are from

How to eat scones?

I must admit to having mistakenly confused the reader with some of these pictures which show the scone sandwiching the jam and cream.

ETIQUETTE ALERT: Beware, this is NOT how to eat a scone!

Firstly the scone should be broken in half by hand, and then the jam and cream is added on top of each other to each half, before eating the two halves separately. 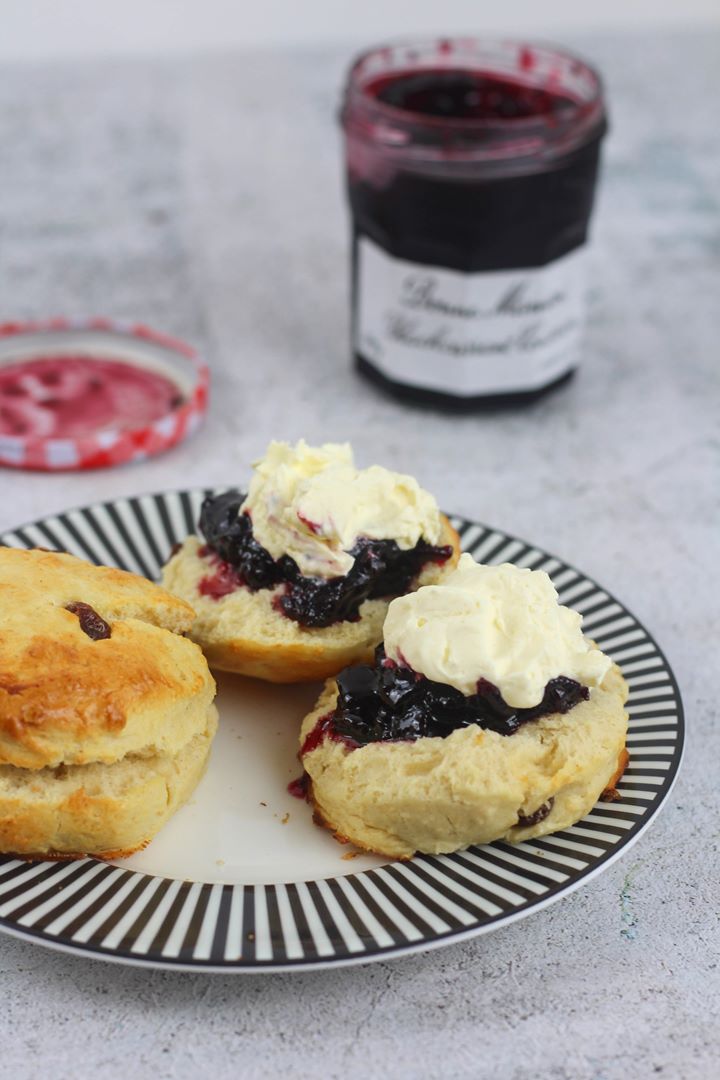 Jam on the bottom, cream on top. The Cornish way

What type of jam to eat with scones and clotted cream?

The type of jam you use in your cream tea is really up to you. Quite often strawberry jam is used but really you can use whatever you prefer. 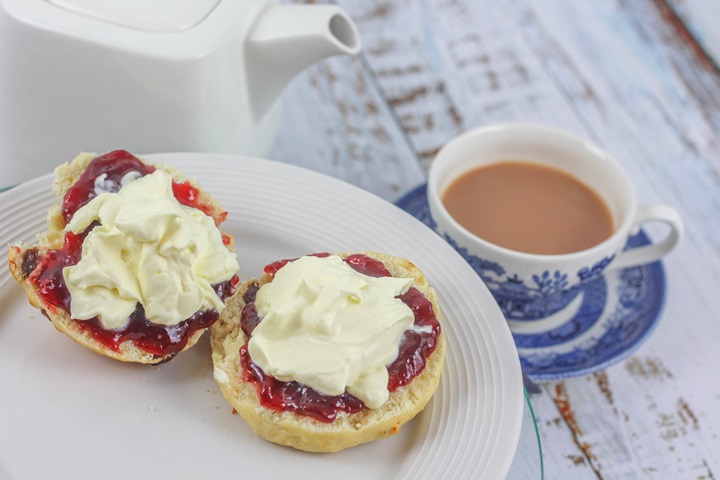 A cream tea with strawberry jam 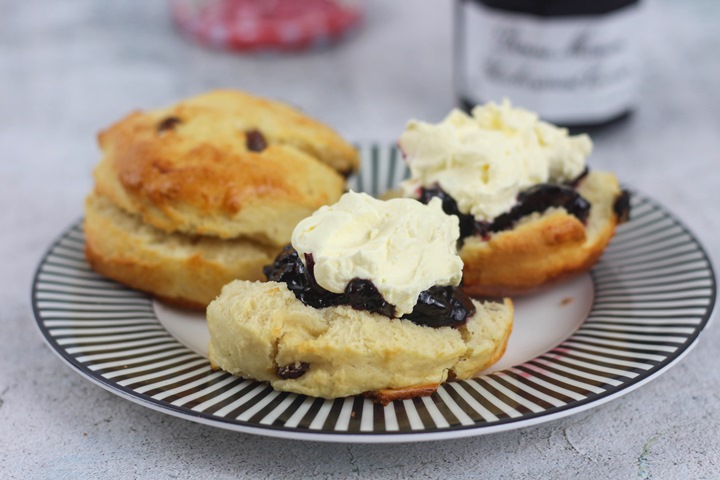 This British scones and clotted cream recipe always reminds me of sitting in the café at the beautiful Lamorna Cove eating a cream tea whilst watching the rain pouring down the windows.

It was just one of the things we would do on a rainy day down in Cornwall. And rainy days, believe me, we had enough every August 😃! 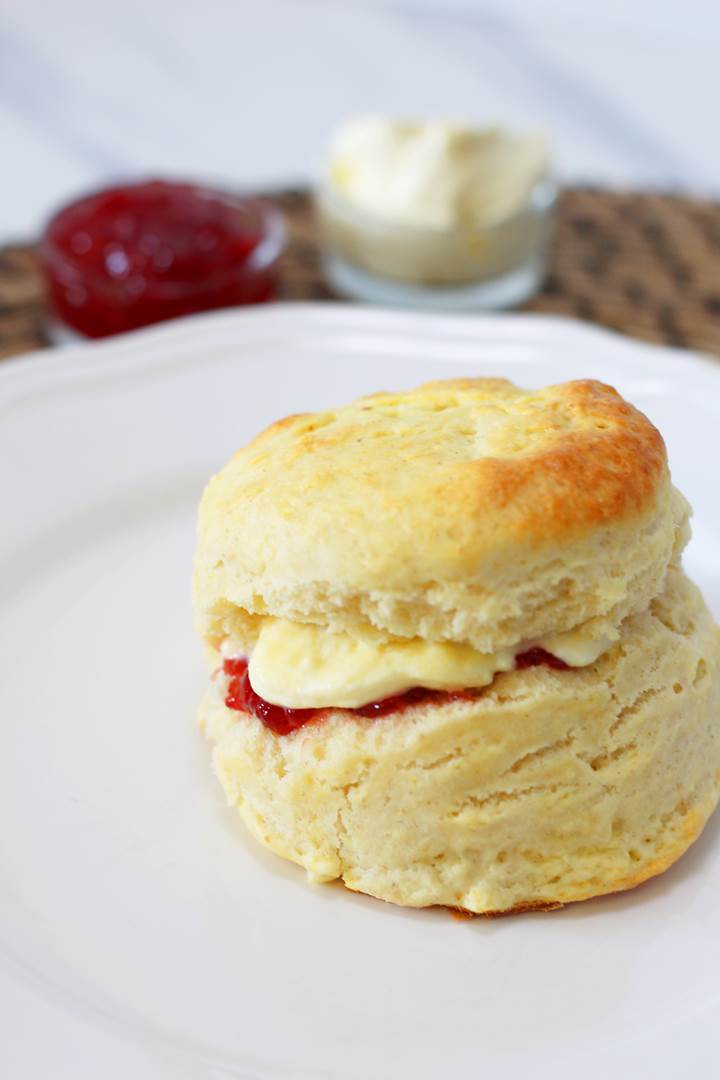 Jam first, clotted cream second, but do not sandwich your scone!!

You can choose, with this Cornish scones recipe, to make plain scones or fruit scones. I have used a mix of dried fruit in some of the scones in these pictures.

I think raisin scones or sultana scones are a bit more interesting than a plain scone, and add something more to the scone, as they can be quite bland on their own. Using a mix of fruits keeps it a bit of a surprise as to what you will get!

And, of course, in the end, the jam and the cream are how you make a traditional English cream tea the icon that it is.

I hope you enjoy trying this easy recipe. If you do, then please let me know how you get on in the comments section below!

How to make English scones

Serve up with cream and jam in pots and a good old pot of tea. Store in a sealed container.

Want to make your own afternoon tea? |Reading this post below will give you more Afternoon tea recipe ideas:
READ
Afternoon High Tea

Like this recipe ? Try some of my other baking recipes here:

Hi there! This recipe is amazing and tastes great. I have made them twice already, once I made them with plain APF, didn't read the recipe well, lol. The second time I tried making my own self-raising flour as I don't have any at hand, I put 2tsp baking powder for every 200gms flour. They did raise a little but not as much as I would like. Could you maybe recommend a ratio of BP to APF please?

@Gav, thank you for your reply, guess I'll just have to keep experimenting until I get what I'm looking for. Again, it's a great recipe so that's what I'll be using as the base. Thank you again!

Glad you enjoyed them. But this recipe is what it is. It does not use baking powder or APF. I have not tried making them without self-raising flour, so could not recommend an alternative.

What milk do you suggest instead of whipping cream? I can’T get any at the moment and wonder if i can use milk or Milk with a littlE lemon juice.

I could not recommend that I am afraid as I have never tried it. I fear the milk would curdle. If you can get some full-fat milk you may be able to skim the cream off the top, like in the olden days with the gold-topped milk bottles. Good luck!

We just made these. So delicious. We did cook for longer at lower TEMPERATURE and they turned out great! Will definitely make these again

Great! Glad they worked out :)

Hi i was wOndering if you could break down the recipe in CupS, tablespoons and spoOns. I treid to Convert myself and my scones turned out fLat😂 Thanks so much!

GET A KITCHEN SCALE AND MEASURE! Converting never tastes the same. You will so glad that you made the investment. I promise! =-)

I just found this link, Maybe this will help you convert the amounts: https://charlotteslivelykitchen.com/grams-to-cups-conversions/?fbclid=IwAR2QF3yqEgLOscyunB9j26ujooE0sMQBOiqy1TJSs0AZi-wNFCvtbUooNng

Hi Karon, shame they did not work for you. Did you use self-raising flour? There is a conversion table under the cooking tips tab. But 500g is about 1.1 pounds and 50g is 0.11 pounds. I tend to weigh dry ingredients when baking. 300ml of milk is approx. 1 1/4 cups. Good luck