This is a simple recipe for apple strudel or ‘apfelstrudel’ as it is known in German. This apple strudel recipe uses filo (or phyllo) pastry to create crisp apple strudels that are just so delicious. 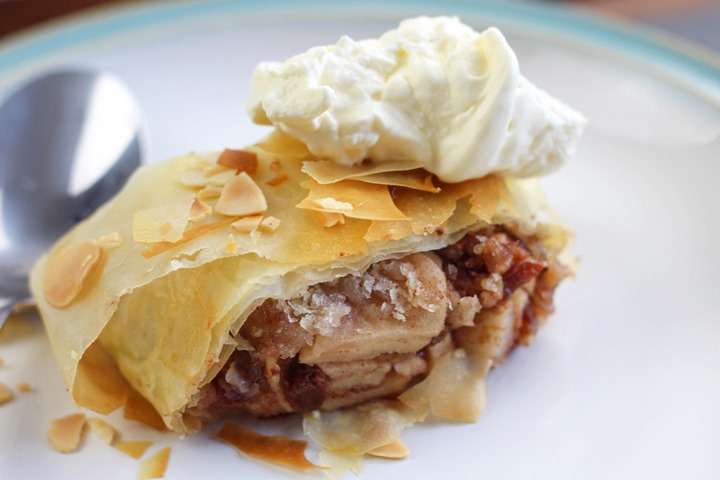 Apple strudel is a dish that originated in the Austro-Hungarian Empire. It is considered one of the national dishes of Austria. In fact, if you visit Vienna, which we did recently, you will find it is available in pretty much all of the cafes in the city, which Vienna is famous for.

I also have great memories of eating apple strudel as a kid when skiing in Lichtenstein, Austria and also on day trips to Germany when I lived in the Netherlands. 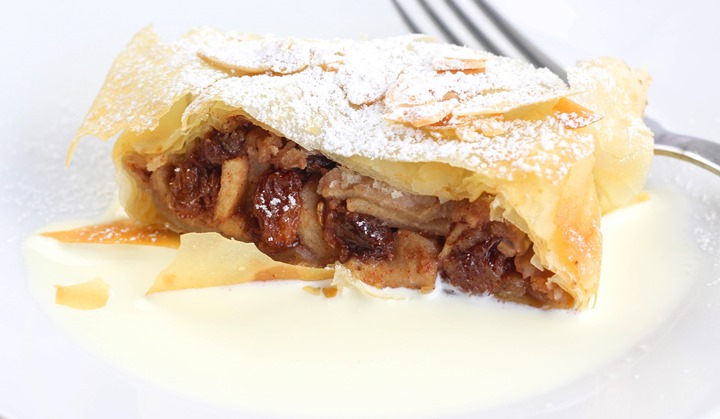 Recipes for apple strudel vary, with some using raisins and nuts and other interesting ingredients in the apple filling. I use sultanas and walnuts in this recipe.

Some people use puff pastry for their strudel, but I find this is not like a traditional strudel as is made in Germany or Austria. There they use a very thin dough which is more like a filo dough, which is layered and gives a crisp outside.

So I used filo pastry in this recipe to get as close as possible to what I have eaten in those countries.

The pastry dough I used came with seven sheets of very thin filo pastry. It was extremely fragile and was difficult to handle, very unlike puff pastry dough.

The original strudel dough is normally repeatedly rolled out as butter is basted to the sheets to give a super layered effect. 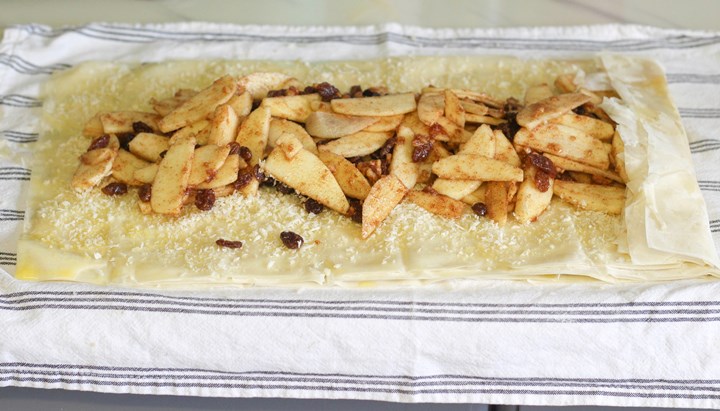 I did butter the sheets here with melted butter but did not roll it out any further because the filo was so delicate, and I did not think it needed to be further layered. I was right. 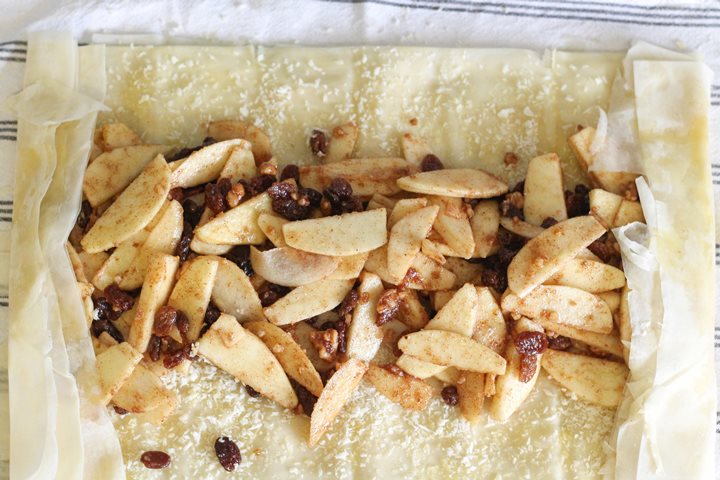 Instead, I basted the sheets with melted butter on a dishtowel before adding the filling and then used the dishtowel to roll the strudel as tightly as possible. The result was a satisfyingly tightly packed strudel, of which I was quite proud. 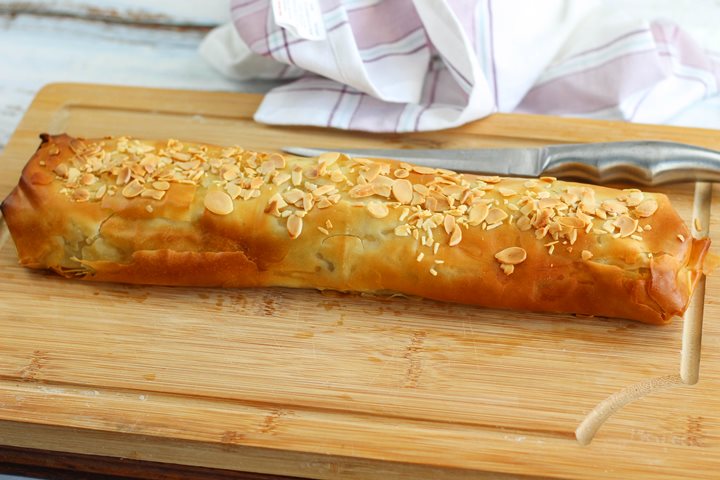 Strudel after baking in the oven

When cutting the strudel to produce the mini apple strudels, the filo pastry was quite brittle and had the tendency to break. But this is how it is meant to be. Make sure you use a sharp knife to make the cut. I actually used a serrated bread knife which cut through quite effectively.

A tip from one of my readers was to lightly score the strudel pastry where you are going to cut it before putting it into the oven, which will prevent it from crumbling when it is out of the oven. Probably worth giving this a try. 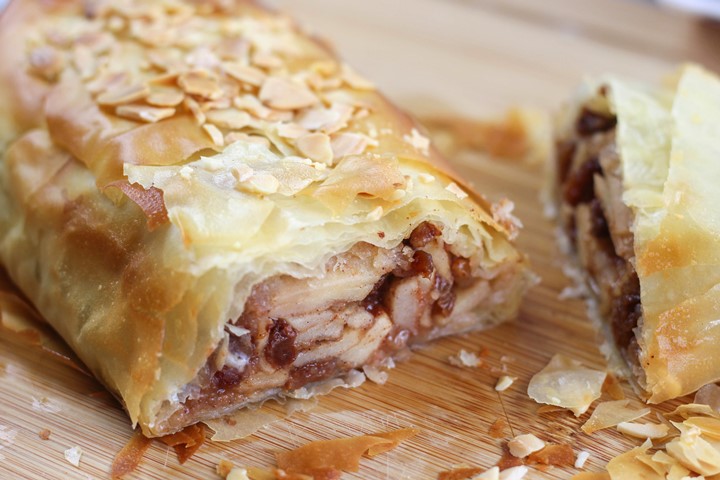 Which apples to use for your strudel?

Many recipes ask for a tart apple, like a cooking apple or Bramley apple to make a strudel, which they then sweeten using copious amounts of sugar. I am not convinced this is the best way.

Why not use the natural sugars from a sweet apple to create sweetness? Strudels are normally powdered with some icing sugar anyway. 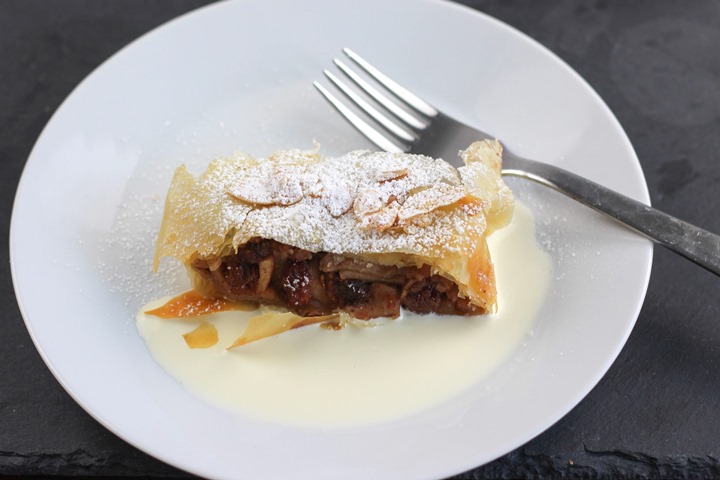 So I used some French-origin Gala apples in this recipe, which are sweet eating apples and it worked out fine and meant I could limit the amount of sugar that I added to the filling. 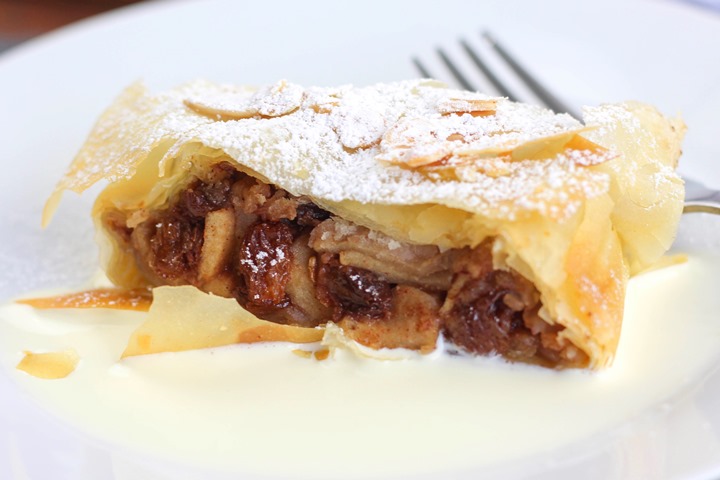 How to eat apple strudel

Apple strudel is a pastry that is eaten a little bit as cake would be. So it would certainly be at home served up for afternoon tea. I think it is better eaten warm, but you can eat it cold if you want.

Strudel is delicious when eaten with whipped cream, ice cream, clotted cream or custard, whichever you can get your hands on.

As mentioned, the filo pastry is quite brittle, so to cut through it you will need a sharp edge like a knife or the side of a fork, which is what I used. 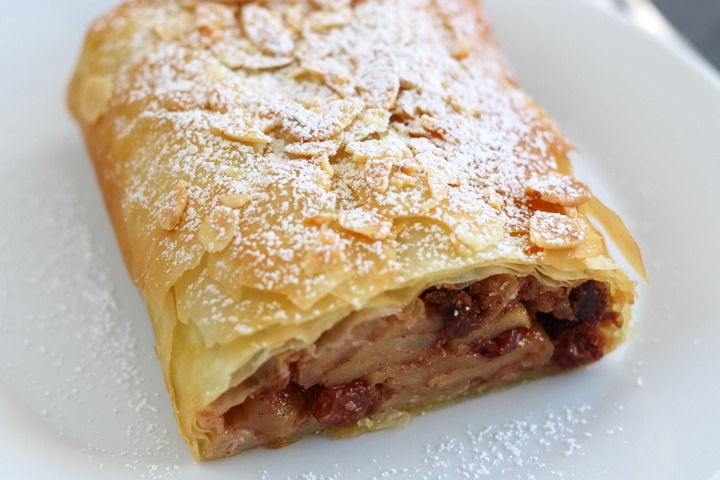 I kept some of this apple strudel overnight in a sealed container in the fridge and reheated in the microwave, but this did make the pastry a bit soggy.

So I found that it is better to reheat strudel in the oven as that keeps the filo nice and crispy.

Apple strudels are great to eat for breakfast – why not make one for your Christmas celebration? A nice alternative sweet treat for the family.

I hope yours turn out as good as mine did!

Good luck trying this recipe. If you do, please let me know how you get on in the comments section below!

How to make mini apple strudels

Can be served warm or cold.

To avoid the crumbling of the brittle pastry sheets when cutting, lightly score the pastry sheets with a sharp knife along desired sizes before going into the oven. Finish the cut along the same lines after baking. Cheers!