Sausage and Mash with Onion Gravy

Bangers and mash with onion gravy is a very typical British or Irish meal that you will find traditionally served up in many pubs across Britain and Ireland. It is one of the many traditional British comfort food recipes I have on this site.

I have listed a few more comfort food recipes at the end of the post.

What are bangers and mash you may ask?

‘Bangers’ are of course ‘sausages’ and ‘mash’ is ‘mashed potato’. I understand the word ‘banger’ comes from when there were meat shortages during WWI and the high water content led to the sausages popping away during cooking!

Contrary to popular belief, you should NOT prick your sausages before cooking. It will just release the fat and reduce the taste. If you are worried about the fat content, then buy leaner sausages.

This is obviously a very simple dish, which needs the onion gravy to keep it moist, as it would be too dry without it. The trick is, of course, to find a fantastic sausage to make this a classic.

Nearly every country has its own types of sausage. Germans have their bratwurst and Knackwurst.

Italians have their salami and other dried sausage. The Dutch have their Braadworst and Rookworst.

The Americans have their pepperoni and hot dogs. The list goes on. And they are all different.

But probably most would be good served up with mash.

It is just one of those combinations of foods that are meant to be together. 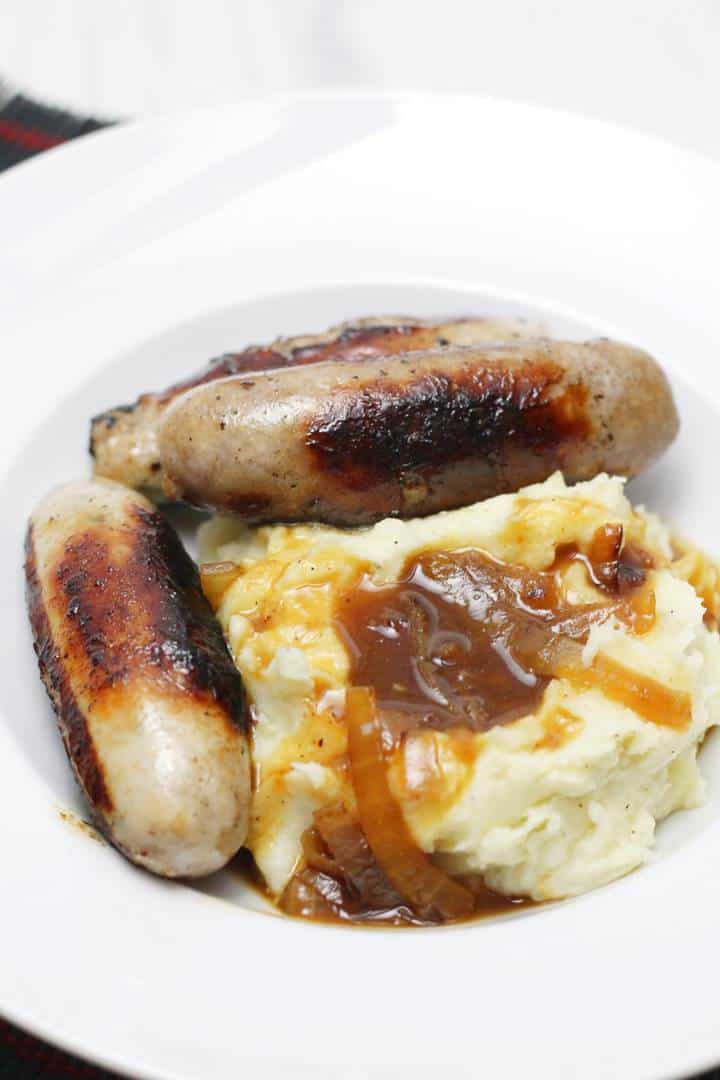 Bangers and mash with onion gravy

This recipe works especially well when you can get a good juicy British or Irish sausage to go with the mash. When you get a tasty one, really it cannot be beaten. Super British comfort food.

There are many different types of sausages in Britain. When I lived in the Netherlands I used to import British sausages in a coolbox in the car when we travelled back to the UK.

We would always try and bring back as much as possible and freeze them, as the good old English Bangers just were not available in Holland. 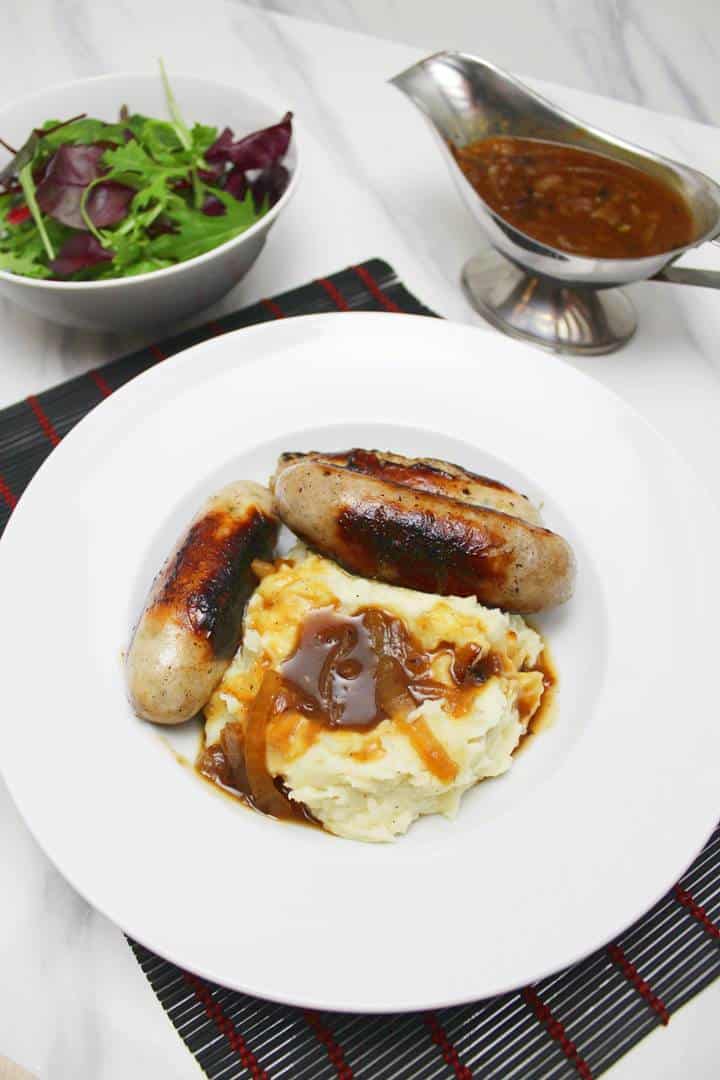 We used to get our sausages from one of the most famous sausage shops in the South of England: Kennedy’s.

Sadly Kennedy’s went bust a bit more than 10 years ago under competition from the supermarkets and rising costs. Their sausages were just fantastic and difficult to match in taste.

These days however you can still get some tasty sausages in the good supermarkets if you shop around, or perhaps your local butcher does his own? 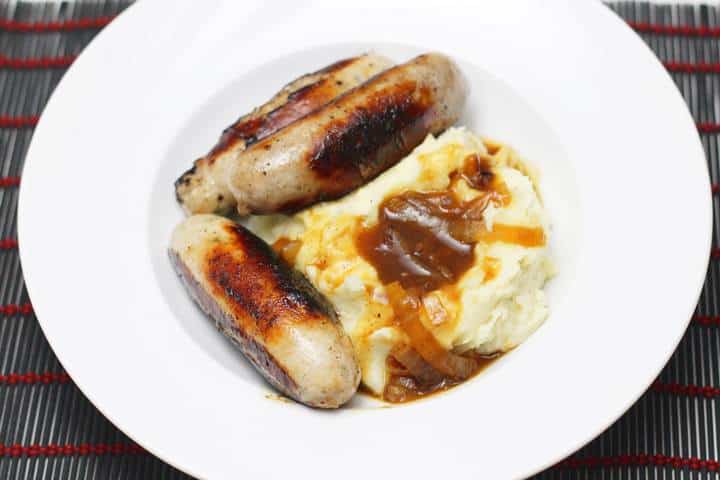 Here in Ireland, we are lucky to get a very good lean Irish Pork sausage. Our local butcher Kelly’s makes his own sausages, and they are fantastic.

In England you will find a wide variety of flavoured English sausages: pork and leek, pork and spring onion, pork and apple, Cumberland sausage, honey and mustard, pork and thyme, garlic and basil, to name but a few.

And then there is venison sausage, beef sausage, chicken sausage. The combinations are endless for a variety of sausage dishes.

I recommend finding a flavour you like which will greatly enhance your eating pleasure. In these photos, we had a mix of pork and spring onion and Cumberland sausages, from our local Tescos which were very tasty.

Click on this link for my simple mashed potato recipe, which should be smooth and buttery.

This recipe below is really just for cooking the sausage and making the bangers and mash gravy.

I hope you enjoy it!

How to make Bangers and mash with Onion Gravy

What to serve with bangers and mash

Serve the bangers on top of the mash, with the onion gravy in a gravy jug. You could also serve up with some cranberry sauce, to add some sweet taste, or alternatively some mustard on the side if you prefer savoury.

You could also serve up with some sweet tasty petit pois. Up to you!

Some other British comfort food recipes: