This bacon and leek pasta bake recipe is another one of my wife’s favourites. I make this for her when she needs cheering up – it never fails!! 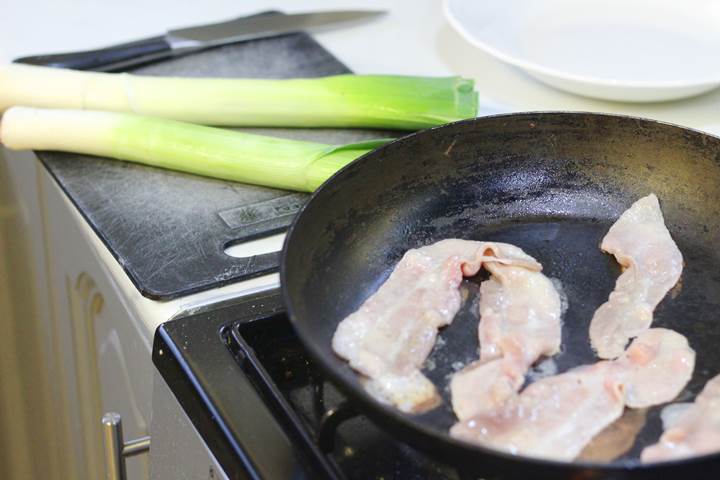 Again it is another one of those great meals you can prepare upfront and pop in the oven when you need to cook it.  A great recipe for dinner parties and the bacon/leek combination with cheese always pleases.

The breadcrumbs on the top give a delicious crispy topping in the oven.

The preparation time is quick and a little dependent on how many pans you like to have on the go at any one time.

I like to re-use a single frying pan, so it takes me a bit longer than it needs to, but you can prepare it quicker if you have the pans and do not mind the extra washing up!

Alternatively, if you have an air-fryer, which I did not have when I first wrote this recipe, you can pre-cook the bacon in there instead of frying it. This makes the recipe even easier!

Leeks and the Welsh

The Welsh people have a number of national emblems. The leek is one of them. As I drove East to West through Wales this week in the pouring rain I wondered whether it shouldn’t be ‘leak’ rather than ‘leek’! It was throwing it down!!

This link about the Leek will tell you a bit more about that if you are interested. The daffodil, the dragon and Prince of Wales Ostrich feathers are also well-known national Welsh symbols.

All of which you will see if you go and watch Wales play rugby live.

We think the leek goes better in this dish than the daffodil! 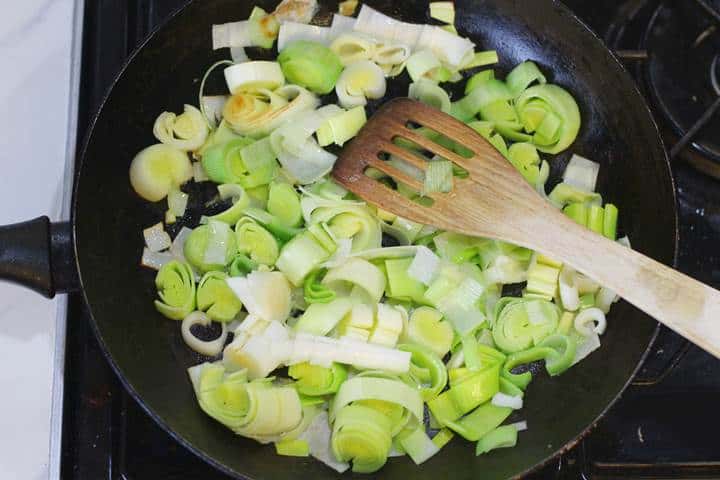 I normally use penne for this recipe, but find that fusilli also works well. But really you can use all types of pasta. 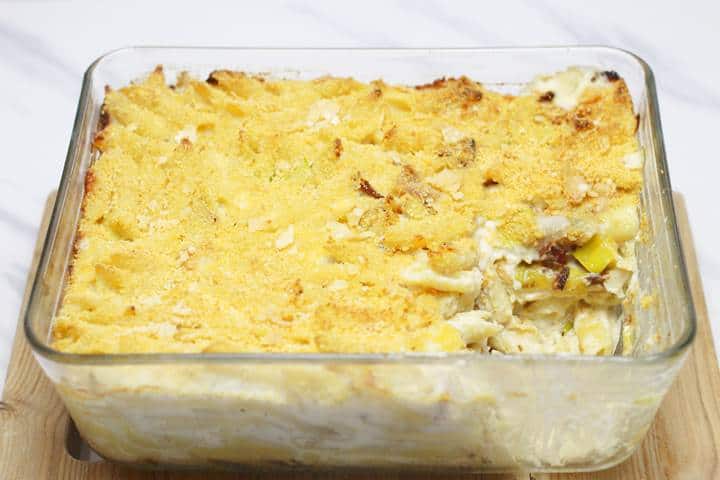 Bacon and leek pasta bake in a cheese sauce

Recently I had some Five Colours Conchiglie pasta leftover which I used up with this recipe. I used a lot of leeks and made plenty of cheese sauce and it turned out to be superb! It certainly had a lot more colour than using just penne.

Here are a few pictures: 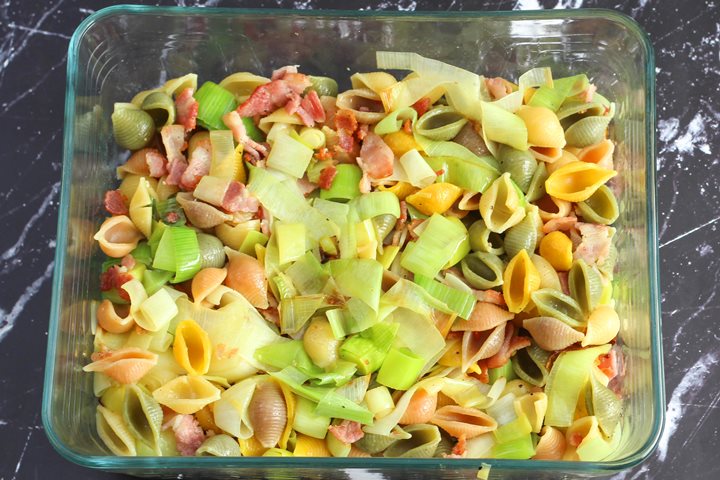 The prepared ingredients, ready to mix 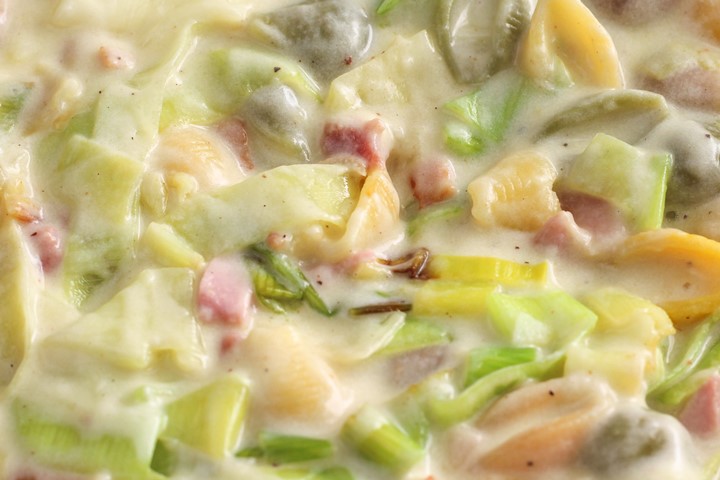 After adding the cheese sauce 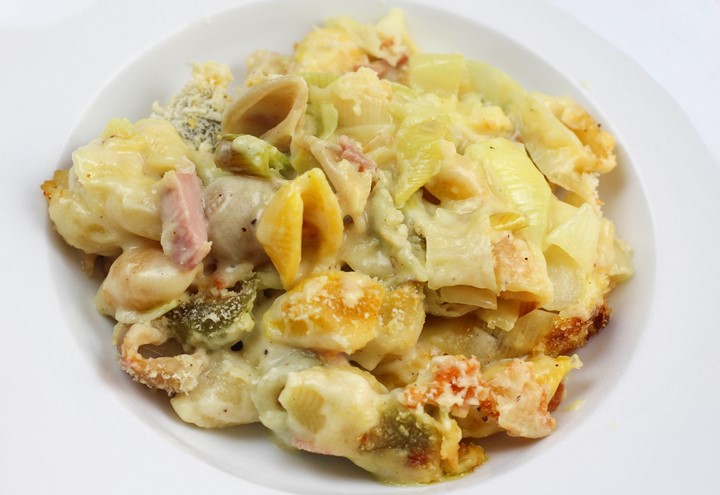 This creamy leek and bacon pasta bake is simple to make and uses an Alfredo type cheesy sauce, which coats the pasta beautifully.

The breadcrumbs and parmesan cheese on the top give it a lovely crispy chewy surface. The cheese sauce for the pasta really goes very well with the combination.

It is a bit like a baked mac and cheese with bacon and leeks added. 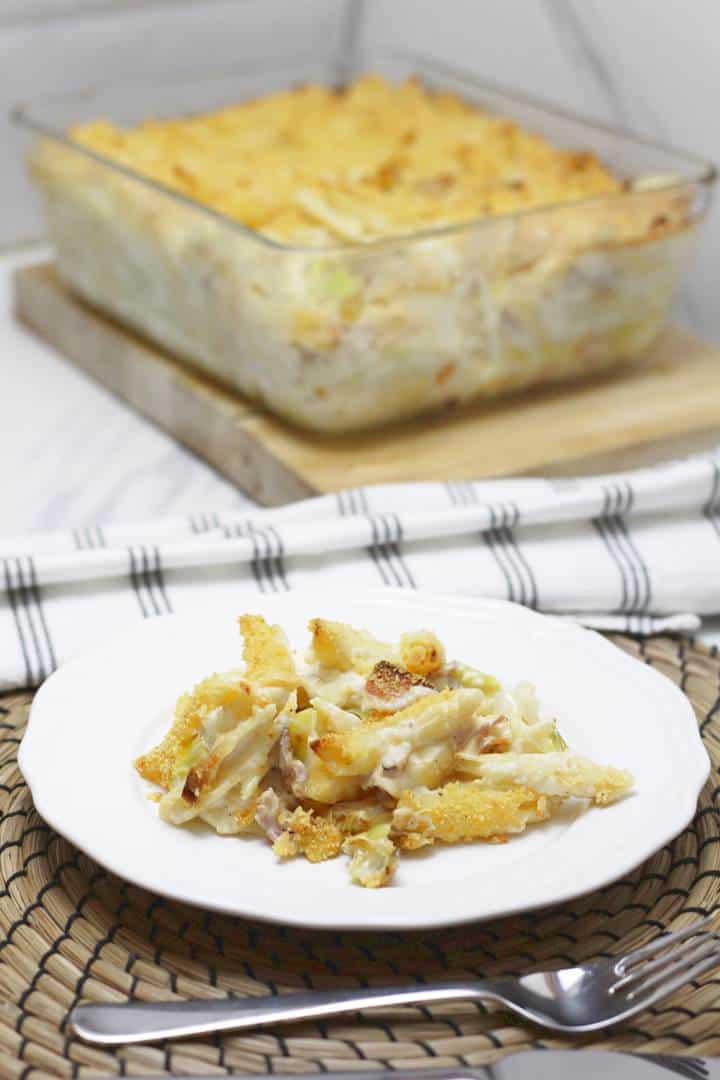 Make sure that you use the right size dish for the amount of ingredients, so that you have enough of the creamy cheese sauce to cover the pasta/leeks/bacon.

The recipe amount below fills a 3-litre dish (approx. 100 fl. oz US) and will feed about 6-8 people (depending on how much you like to eat!)

This recipe is another good recipe for using up any leftover ham, if you have any, after Christmas or Thanksgiving.

Just replace the bacon in the recipe with ham. I like to fry the ham in the pan a bit before adding it to the dish. The result looks pretty much the same as a penne version and tastes great. Here I used some macaroni pasta. 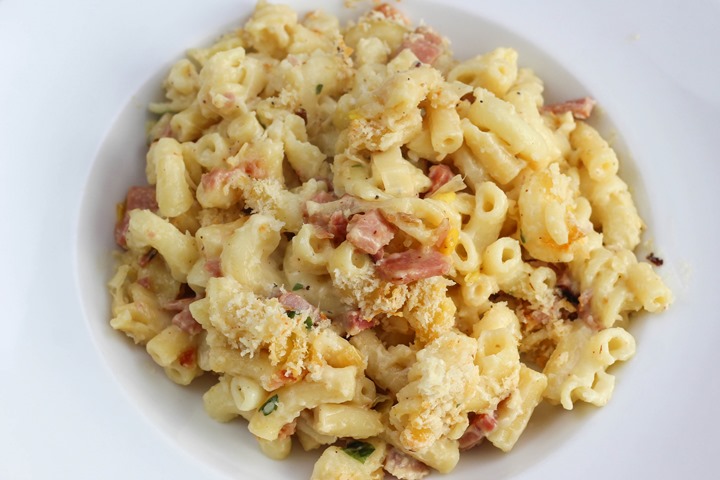 Using leftover ham in the recipe 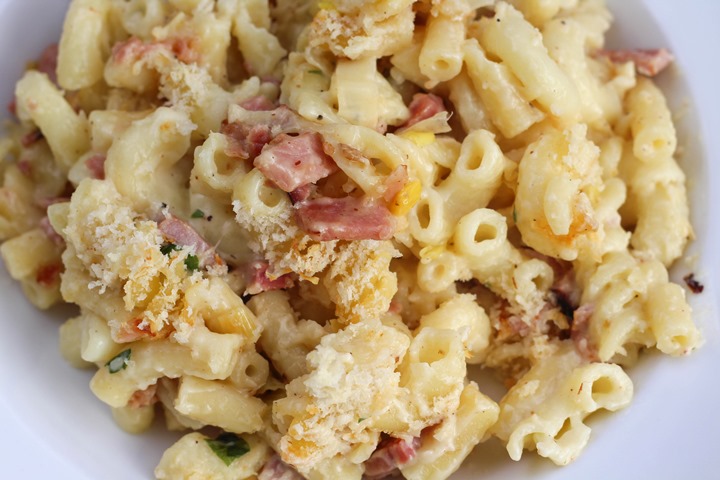 I hope you enjoy making this recipe. It is one of our favourites. If you do, please let me know how you get on in the comments section below!

How to make this cheesy pasta bake recipe

Put the hot dish in the middle of the table, take a big serving spoon and help yourself. But be quick as everyone will want the crispy bits on the top!

The recipe is also good for using up ham leftovers from this recipe (if you have any):
READ
Boiled ham recipe (with baked honey mustard glaze)
Just use chopped ham instead of bacon.

If you enjoyed this recipe, you may like to try these :