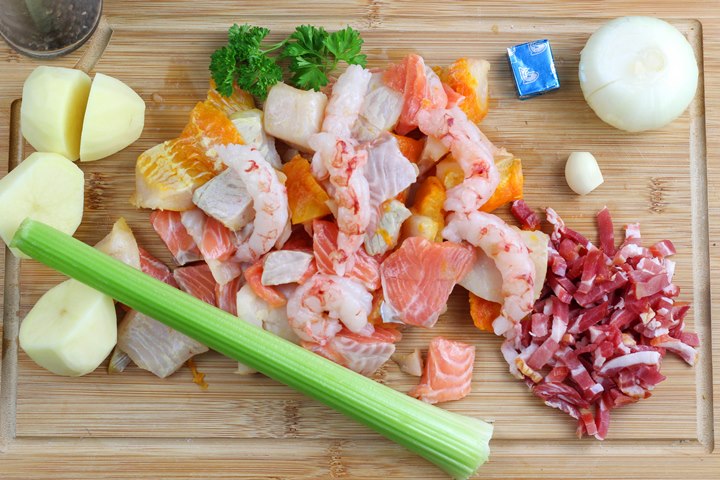 What is in Irish Seafood Chowder?

Aldi’s also sell a seafood mix, which is a slightly smaller package (250g), but also perfectly suitable, which contains a mix of fish like Haddock, Cod, Pollack and Hake with some salmon, also with some smoked fish in it. The smoked fish imparts a lovely smokey flavour to the chowder.

I have used both ingredient mixes in the past to make this dish. Just adjust the milk quantities pro-rata to suit the fish amounts, depending how chunky you like your fish stew. 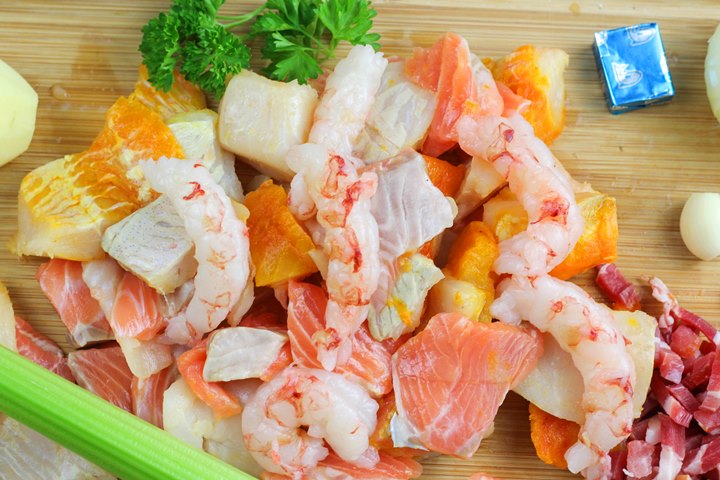 Fresh fish is obviously better if you can get it – just make sure you use a nice mixture of fish that complement each other. Mackerel, being a very oily and strong tasting fish, would not really fit very well in this dish, for example.

I also used some frozen King prawns and some Irish crab meat, to fill the dish out, but really you can use pretty much what you want, as long as the tastes go together.  Atlantic prawns, mussels or clams would all complement this meal nicely. 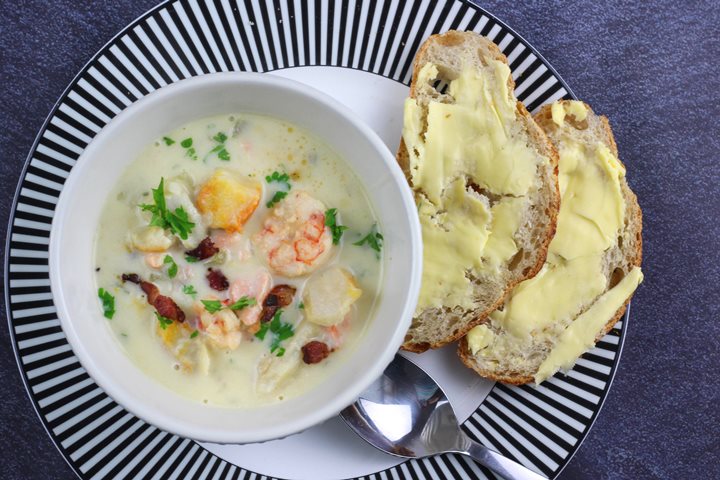 Seafood chowder in Ireland can consist of many varieties of seafood, but commonly you will find that restaurants will use the fresh fish and shellfish that they can get locally. Hence salmon, haddock, hake, cod and pollock will often be found in an Irish chowder.

But really you can use whatever you can get your hands on locally. If using fresh fish, just try and make sure all the fish has been properly de-boned. There is nothing worse than a fishbone stuck in the back of your throat! 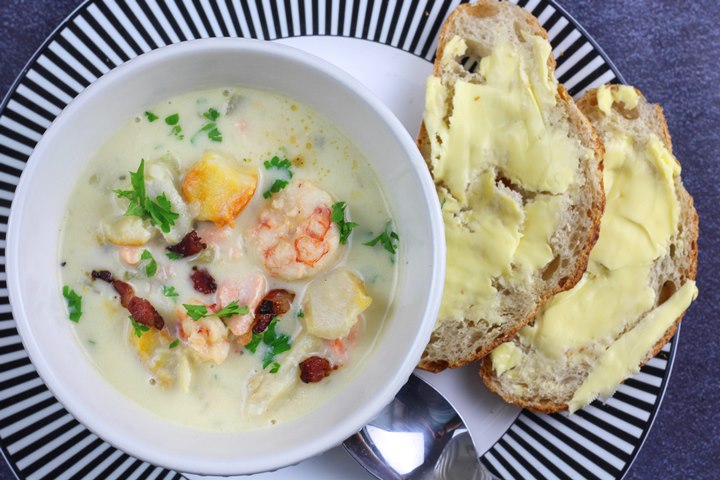 Just make sure the fish is the kind with nice meaty type flesh, like haddock or salmon that does not need lots of cooking until it falls apart. Some of the farm-fished white fish out there today are also less suited to be used in a chowder I think, because of this. 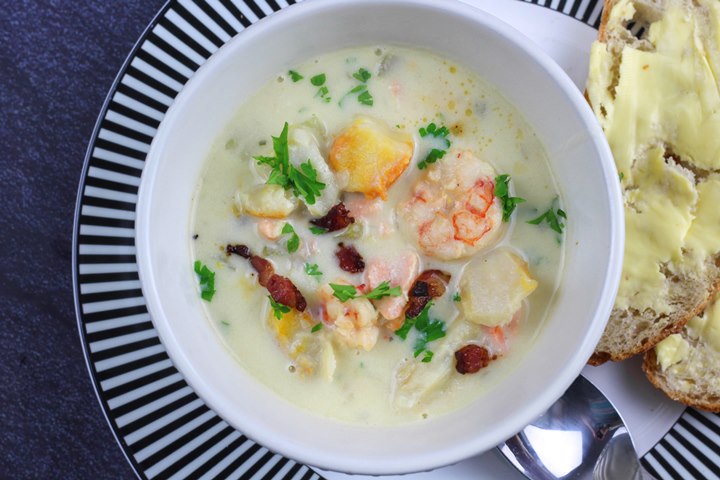 In the West of Ireland, chowder is nearly always served with soda or wheaten bread to mop up the juices. Ideally, a good Irish salted butter like Kerrygold would be used to butter the bread. We are so very lucky to have such superb quality dairy products in Ireland. 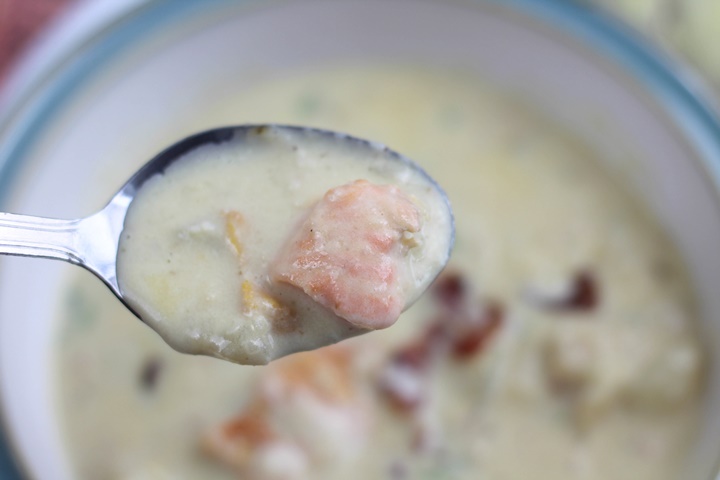 This is a really tasty recipe, and if you have any leftovers you can keep it in the fridge for a day and reheat it. It tastes even better a day later.

I hope you enjoy this simple recipe and try and make it at home.

If you do try it, please let me know how you get on in the comments section below, and how you improved it. What seafood did you use?

How to make Irish Seafood Chowder

Serve up with some chopped parsley and the rest of the crispy bacon garnish, together with some traditional buttered Irish Wheaten bread.

The quantities above are enough for 6 generous helpings.

Feel free to add mussels, clams or other suitable seafood if you wish.

The best chowder I have ever tasted and so easy to make.

Brian, thanks for your lovely comment. Glad you enjoyed it!!

Ok, so I modified this recipe for my crockpot and fish availability. I used frozen salmon and cod, imitation crabmeat because my grocery had no crab meat because was late and shell on shrimp because it's Chicago. Everything was cooked on low for 7 hoursin my crockpot. For the bacon, I decided to experiment. I doubled the amount and split it into thirds. For the first third of bacon, I added it right at the beginning. I pan cooked the rest of the bacon and added the second 1/3 about 2 hours before it was done. I used the last 1/3 as a topper. It worked in that the original bacon added at the beginning was chewy but I feel added good flavor. The second 1/3 stayed hard but had good flavor and the toping bacon added the extra flavor. I also added a heaping Tablespoon of dried Thyme and it was awesome. I used whole milk and whipping cream so it was heavy and added one tablespoon of cornstarch to make a bit thicker. I added 1 cup of fresh parsley in the last hour and had it ready as a topper. Otherwise followed the recipe closely.

It turned out fantastic. I served it with french bread and it was loved. I could have added frozen scallops or squid and it would have added a texture to it. This is now my go to Irish Seafood Chowder for experimenting as it's very neutral and simple, but complex enough to inspire creativity and economy.

Glad it worked out OK Michael. I have taken to frying the bacon in my air fryer now as it is easier and gives you nice crispy bacon you can cut to suit. It is a great recipe for St. Patrick's day!

This was really good base for chowder. I just added some chili powder as we love a bit of heat and I also added a couple of oranges. Yummy.

Thanks for your comments Debbie. Glad it worked out. Intrigued about the oranges! Must have to try it!

I had chowder at almost every stop along the west coast of Ireland. And, yes, each was slightly different. All were delicious. I couldn’t wait to add this to my Christmas Eve feast. I used shrimp and crab - utilizing the shells to make stock, and cod. This is delicious! Thank you for sharing. Oh! And I served it with a brown bread recipe from one of my favorite pubs along the way.

Shrimp, cod and crab - yummy! Funnily enough, I had a not-so-good one last week on the West coast, but mostly they are good! Glad it worked out.

Hi Gav, Hello from Australia! I'm planning on cooking your chowder tomorrow for friends. I'm not sure I understand what happens with the bacon. I see that half the bacon is added at the end. What happens with the other half. And do I cook the potato/onions celery in the remaining bacon fat at step three or with the fish at step 5 or not at all. Really looking forward to tasting this.

Hi Dave, congrats with the Wallabies win just now! Half the bacon goes in at the end and the other half I used for garnish on top. The recipe has the potatoes, onion, garlic and celery fried in butter (not bacon fat) in step 3. And then cooked in the stock in step 4. Good luck, hope it turns out well!