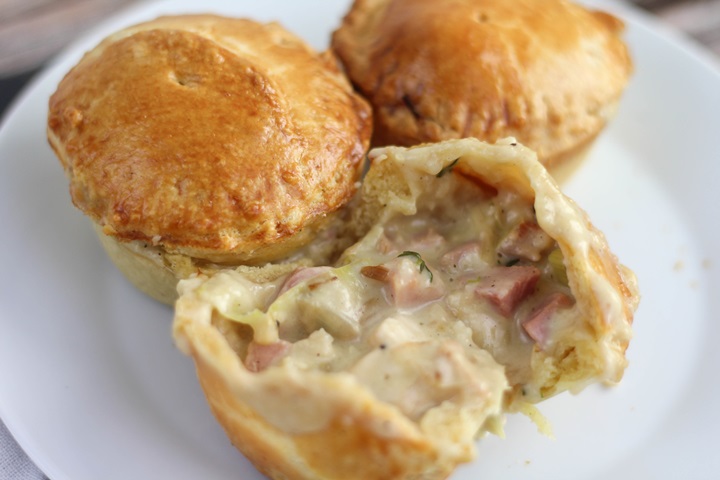 Pies are a very important comfort food in many countries around the world. This recipe will give you a delicious pie pastry recipe which will enable you to make your own mini chicken pot pies or individual pies with whatever you may want to put in them! 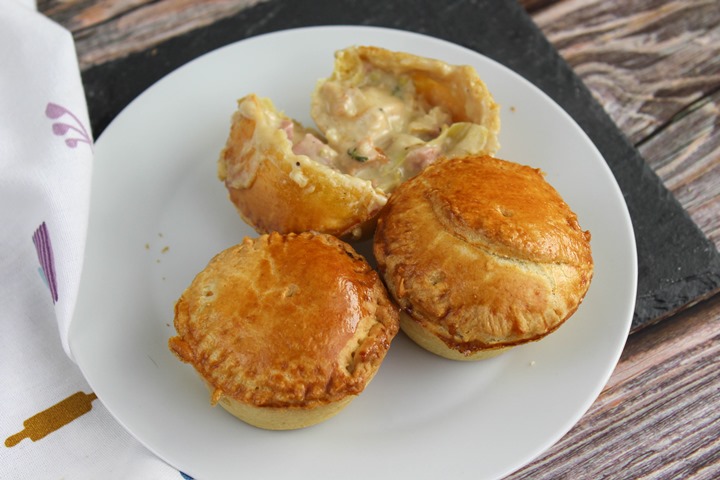 A delicious Recipe for Ham and Chicken or Turkey Leftovers

Christmas and Thanksgiving always gives a pile of leftovers which have to be used up, especially chicken or turkey and ham.  Sometimes we put them in a single chicken ham and leek pie, or a chicken and mushroom pie, but in this recipe we turn them into some delicious mini pot pies.

They are delicious hot and served up on their own or with a nice salad.

The secret to this recipe is the delicious shortcrust pastry which initially I made myself this time, rather than using ready-made pastry.

Some people say life is too short to make your own pastry. But contrary to what some people say, it does not take that long to make a tasty pastry and you will see that when you try this recipe.

Not only was this recipe easy to make, but it uses basic ingredients. The only thing is that you need to put it in the fridge for an hour to make it easy to roll out and shape.

The only problem was making the right amount. When I made this initially I used half the pastry ingredients and only had enough for nine pies. So I stored the filling and made seven more the next day using store-bought pastry. 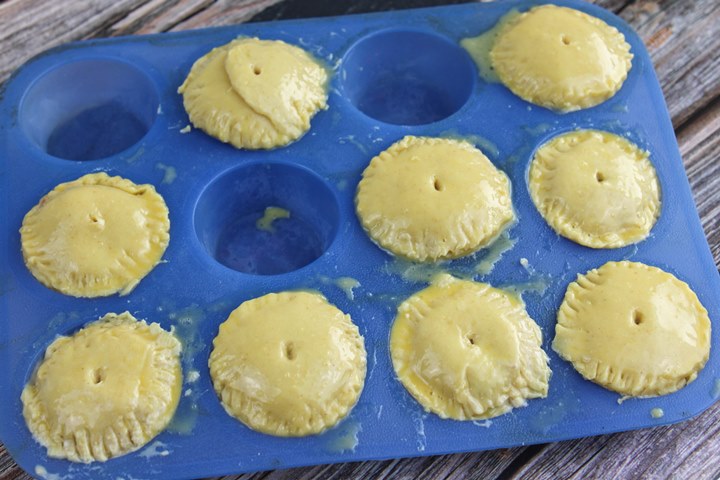 The difference in taste was significant, with the homemade pastry being definitely much tastier than the store bought pack from Aldi.

I will definitely use this pastry recipe again to make other types of pie – maybe even some sweet ones. 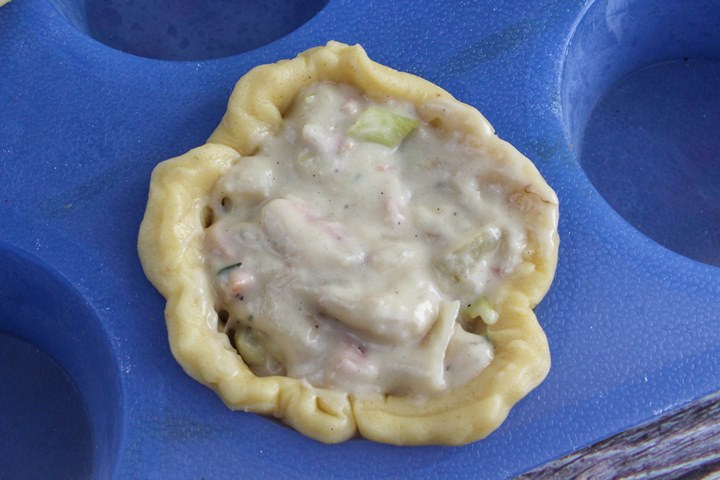 The amounts have been adjusted now in the recipe to make the full amount (although it will depend on the size of your muffin tin). My silicon muffin tray has holes with a diameter of about 67mm, and I made a total of sixteen of these pies.

The only tricky part of this recipe is filling them so you do not get too much leakage. You need to cut the base of the pastry large enough to give enough to work with when you are doing the crimping. 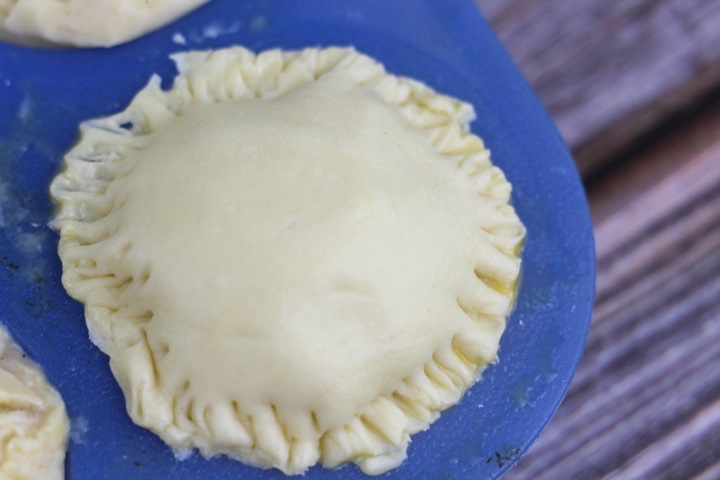 The egg wash needs to be brushed on the pastry surfaces that will be crimped so that it works to glue the pastry together.

You can see from the pictures that my handiwork still needs some improvement. I did find that in some cases if you have enough pastry you can overlap on the top, which did actually provide a more reliable seal. It maybe does not look as good but it worked very well!

The big question I had was whether or not to put a hole in the top of the pies. I did this for the first batch, but then had quite a lot of filling leakage through the holes in the oven. So in the second batch, I kept them shut, and I think the result was better – less leakage and more filling! 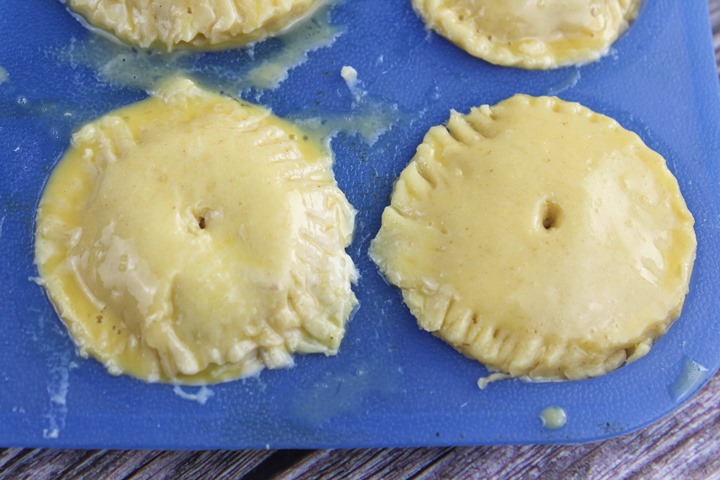 The advantage of cooking individual pies is that they can easily be frozen after cooking and retrieved from the freezer when you need a quick meal. And also they taste better than any pies you can buy in the shops. 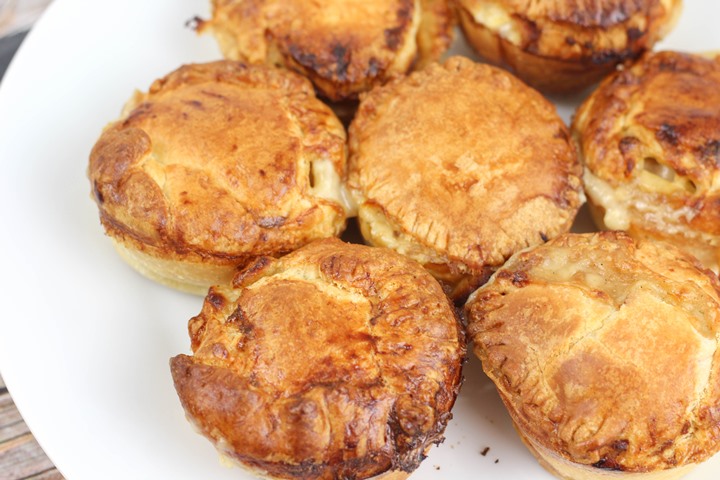 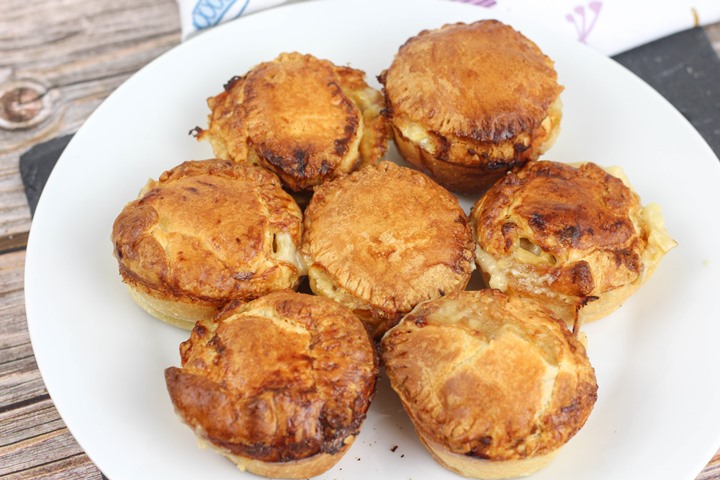 I hope you enjoy trying this recipe and would love to see some pictures if you do!

These pies can be easily frozen and taken out to re-heat for a quick and easy meal. They can be re-heated in a microwave, but are better if heated in the oven.

Make these pies when you have leftovers from:

Recipesformen (Gav's Kitchen) is a participant in the Amazon Services LLC Associates Program, an affiliate advertising program designed to provide a means for sites to earn advertising fees by advertising and linking to amazon.com, amazon.co.uk, amazon.ca. Amazon and the Amazon logo are trademarks of Amazon.com, Inc. or its affiliates.
Skip to Recipe
166 shares