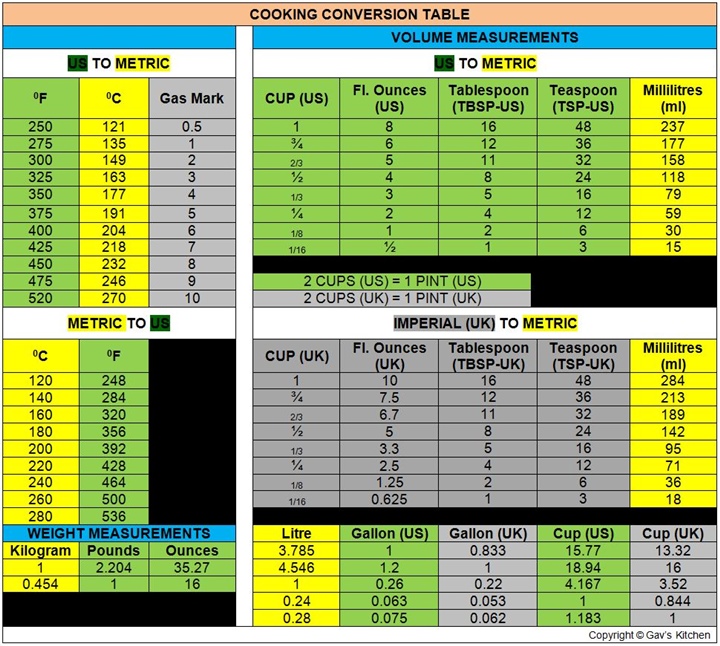 This post describes some of the differences between UK, European and American metrics used in the kitchen. It includes a cooking conversion table to help you convert some of them.

I was born and raised in the UK so I am used to working with different metrics.

I am also used to British spelling of the English language. So you may find stuff on my site that you think is incorrectly spelt. It may well be, or it may just be how we spell it over here.

Or it could just be a spelling mistake, caused by learning different languages or from living in Ireland! Where we live now they spell place names in two or three different ways, so how much does that really matter?

However when it comes to measuring stuff, we also still do things differently. This is often a subject of confusion between the USA/UK and the rest of the world.

The USA is in fact only one of three countries in the world that have not adopted the metric system as the primary method of weighing and measuring!

In the USA and the UK, we still like to use pounds and ounces as a measure of weight. The rest of the world uses kilograms.

But that is where any similarity ends. Our gallons, cups, stones and even pints are all different.

But it is interesting to see that both in the UK and US there are two cups in a pint, even though the measures are different.

The only sense I can see in the Imperial system is that there are exactly 16 cups in a gallon, just as there are 16 ounces in a pound.

The same goes for temperature measurements. In Europe, we tend to use Centigrade whilst in the USA you still use Fahrenheit.

So having said that, here below you will find a simple conversion table for cooking.

It may help you when you are struggling through my ingredients lists and method descriptions, that may include oven temperatures in Fahrenheit, Celsius or gas marks, weights in pounds or kilos, grams or ounces, and volumes in pints, cups, teaspoons, tablespoons etc etc.

Perhaps you may be able to print this off and use as an easy reference in your kitchen? I have one plastified and stuck to my fridge 😊.

I hope you can follow it or use it as an easy reference list – I do, because I can’t remember the conversions either. It will at least tell you the answer when you need to convert 1 cup to ml. and vice versa.

Coming back to spelling…..

My recipes will mostly have grams, millilitres and temperatures in 0C, just to avoid any confusion. If I do mention ounces it will be a weight measure.

And if you are looking for a translation of cups to weight for different ingredients, then Charlotte’s kitchen has a very handy food conversion calculator for doing just that. Check it out here. But bear in mind, when baking it is always best to weigh your ingredients due to variations in density, amongst other reasons.

And regarding the spelling thing…….…I make no further apologies or excuses!

And finally, in Holland they have a saying: ‘meten is weten’. This means ‘measuring is knowing’. ie you have to measure something when you need to assess whether or not you need to make changes or improve something.

Bear this in mind when you are working in your kitchen and your cake is not rising as it should!

Recipesformen (Gav's Kitchen) is a participant in the Amazon Services LLC Associates Program, an affiliate advertising program designed to provide a means for sites to earn advertising fees by advertising and linking to amazon.com, amazon.co.uk, amazon.ca. Amazon and the Amazon logo are trademarks of Amazon.com, Inc. or its affiliates.
1shares